Pacific leaders to turn up heat on climate change 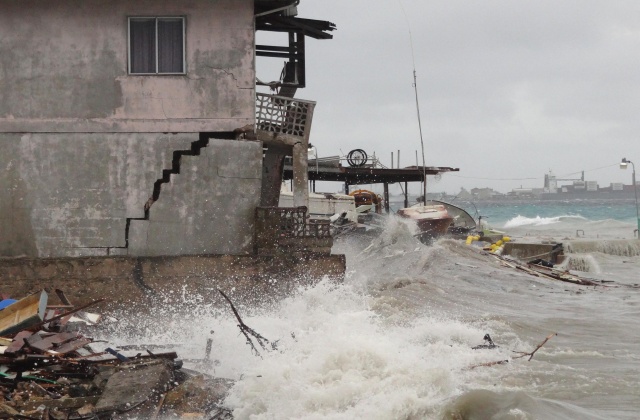 This photo taken on July 4, 2015 shows a damaged building after a storm in Majuro as a tropical depression moved through the Marshall Islands. Almost 70 years ago, the people of Bikini Atoll left their homes to allow US nuclear testing, now the Pacific islanders' descendants say they must move again -- because climate change has rendered their new home uninhabitable. (AFP PHOTO / Giff JOHNSON)

(AFP) - Climate change will dominate discussions when the leaders of vulnerable Pacific nations hold their annual meeting in the Samoan capital Apia this week, with global warming threatening their existence, officials say.

The 18-member Pacific Islands Forum (PIF) includes countries such as Kiribati and Tuvalu, which are only metres above sea level and risk being swamped by rising oceans.

Others, such as Vanuatu and Fiji, have been battered in recent years by devastating cyclones that have become more extreme as global warming affects weather patterns.

Tuvalu Prime Minister Enele Sopoaga said there was no subject more important to the people of the Pacific.

"This is an issue about our existence... climate change threatens our very identities," he said.

PIF secretary general Meg Taylor said the summit, which opens Tuesday, was an opportunity for small island nations to speak as one voice.

"We can do more together than we can alone, I think this will be at the heart of the discussions," she said.

Taylor said the unified approach had already proved successful when Pacific nations successfully pushed for strong aspirational goals at the UN climate talks in Paris in 2015.

"That was led by the champions of the Pacific... (we) were able to persuade the world that this was so very important," she said.

The Pacific's next chance to prick the world's conscience and demand further action on climate is at UN talks being held in Bonn in November.

Fiji, as one of the island nations on the frontline of climate change, has been invited to chair the talks, making this week's PIF an important forum for Pacific leaders to discuss strategy.

But Sopoaga said the bigger issues of global warming and sea-level rise needed to be addressed and relocation was not the answer.

"Embracing this as a unique opportunity in the history of the region, the Blue Pacific provides a new narrative for Pacific regionalism and how the Forum engages with the world," he said.