US president calls Seychelles an economic model for Africa 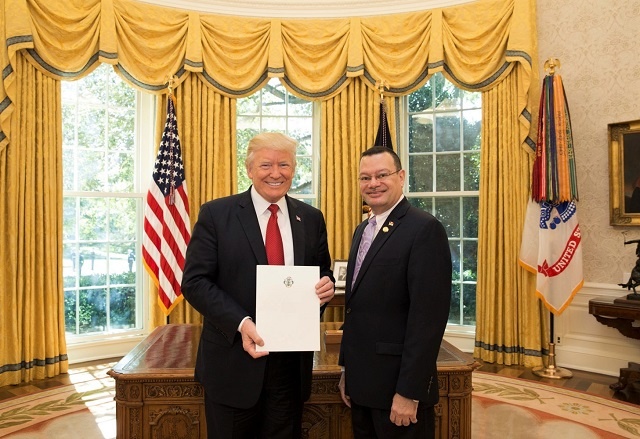 Ambassador Ronny Jumeau presented his credentials to U.S President Trump on Friday in the Oval Office at the White House. (Ministry of Foreign Affairs)

(Seychelles News Agency) - An economic model for Africa. That's how U.S. President Donald Trump described Seychelles at the accreditation of the island nation’s ambassador to the U.S., a statement from the Ministry of Foreign Affairs said on Sunday.

Ambassador Ronny Jumeau presented his credentials to Trump on Friday in the Oval Office at the White House.

Speaking at the ceremony, the U.S president said, “Seychelles stands as a model for other African economies as one of the top per-capita-income countries in the region.”

“Seychelles’ innovative financing programs promote development, help its citizens succeed, and protect its treasures on land and sea,” Trump said, referring to the island nation’s debt-for-adaptation swap and forthcoming blue bonds, the first of their kind.

Seychelles established diplomatic relations with the United States in 1976 following its independence, and the two countries enjoy a history of partnership and cooperation based on shared priorities.

The U.S. President said the two countries share a long history “including our partnership over the years to combat piracy and assure maritime security in the Indian Ocean.” He said that Seychelles’ willingness to apprehend, prosecute, and incarcerate law breakers “helps the international order and means a great deal to the United States.”

Noting that the two countries enjoyed a strong relationship, Ambassador Jumeau reminded the U.S. President that “along with other small island developing states, Seychelles faces one of the most important issues of our time: the threat of climate change.”

The U.S. like Seychelles is not spared from natural disasters. On Sunday the state of Florida was hit by the hurricane Irma which has caused around 27 deaths in the Caribbean.

Jumeau said, “Climate change threatens the very existence of thousands of islands, and the people who inhabit those islands, and we must act decisively.”

The ambassador also spoke of the strengthening of democracy in Seychelles, a group of 115 islands in the western Indian Ocean, where the president, Danny Faure, is working in cohabitation with the opposition. While the executive body of the island nation is from the president’s Parti Lepep, the legislative body – the National Assembly -- is controlled by the opposition coalition -- Linyon Demokratik Seselwa (LDS).

Jumeau said, “President Danny Faure has focused on enforcing the principles of good governance, transparency and accountability under his mandate.”