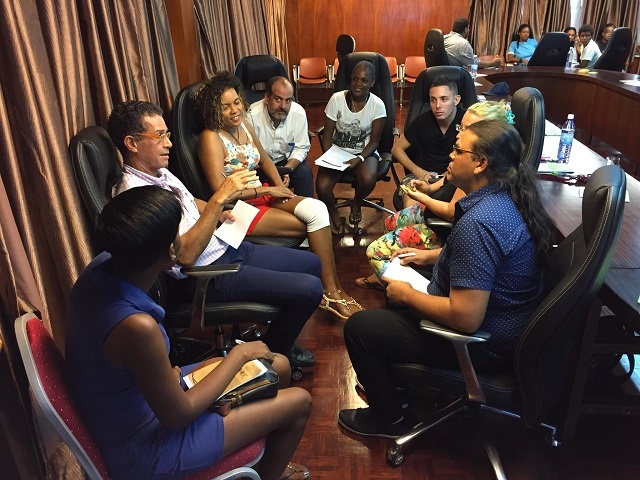 The LGBTI group in a session which was part of one of their initial workshops. (LGBTI Sey, Facebook)

(Seychelles News Agency) - The local group for lesbian, gay, bisexual, transgender and intersex (LGBTI Sey) is seeking to be accepted by society in Seychelles and respected for their sexual orientation, said the vice chair of the organisation.

The group was set up two years ago and was officially registered last year, but members are yet to be accepted, said Ronny Arnephy.

Arnephy told SNA that Seychellois with different sexual orientations are targets of discrimination and “we want Seychelles to be a country where all people are accepted and affirmed, regardless of their sexual orientation or their gender.”

He said that when this happens, “LGBTI people will be able to live happy and healthy lives where they can be model citizens, be productive and contribute to the growth and economy of the islands.”

Arnephy, who has been involved with the gay community since 2011, and co-founded the group with Fabianna Bonne in 2015, said mass education is needed to raise awareness of the LBGTI community, who are people faced with many challenges on a daily basis.

“I know young men who have been slapped by their parents for watching what is considered as shows for women and some are ridiculed for being cross-dressers,” added Arnephy. He said that this is resulting in lesbians and gays attempting suicide.

The main mission of the group is to provide an open, safe and inclusive space for their members. “We do recognise that this work requires understanding, education and addressing all forms of oppression,” said Arnephy.

The group feels that the laws of Seychelles should be reviewed to make it more inclusive. The first step in the right direction was taken last year with the decriminalisation of the act of sodomy after more than 60 years.

The law was introduced in 1955, when Seychelles, a group of 115 islands in the western Indian Ocean, was still a British colony and was applied in rare exceptions before 1992 in the island nation with a population of 93,000.

Arnephy told SNA that he attended an exercise recently where the rights of unmarried couples were being discussed by the Attorney General’s office. “I asked about the rights of same sex couples, will they be recognised or will they benefit? I was told no because it is not mentioned in the Constitution.”

The vice chair said the local group is already affiliated to a coalition of Lesbian, Bisexual, Gays and Transgender within the Indian Ocean and the Aids Rights Alliance of Southern Africa. The local group also acts as support and network for the local community.