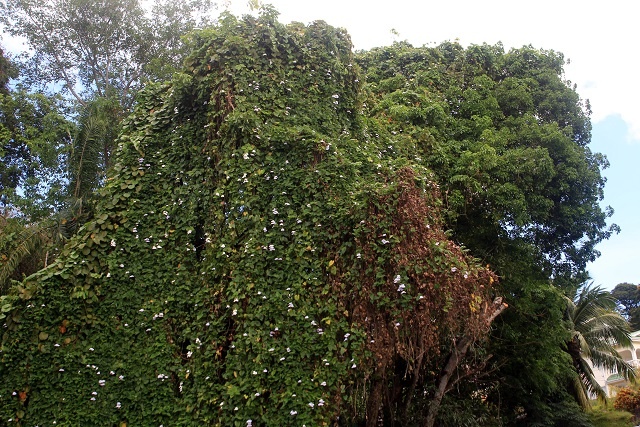 Invasive creepers have been one of the top concerns for conservationists and environmentalists in Seychelles for some years now. (Joe Laurence, Seychelles News Agency)

Invasive creepers have been one of the top concerns for conservationists and environmentalists in Seychelles for some years now. In the past, there have been attempts to control the three more aggressive ones -- devil’s ivy, trumpet and merremia vines. These plants can cause severe ecological damage to the island nation’s rich, unique but fragile environment.

“There is a dire need to control these as they propagate extremely fast,” said Damien Doudee, who is in charge of the authority's forestry station at Sans Soucis in the central district of Bel Air.

Doudee told SNA that: “These creepers are rampant on Mahe, in areas such as at Fairview, La Misere, Kan Tobruk at Foret Noire, Bel Eau, Bel Air, and Sans Soucis up to Morne Blanc.”

With the new campaign, funded by the Environment Trust Fund, which is managed by the Ministry of Environment, Energy and Climate Change, the Seychelles National Parks Authority is coming with a new approach.

“We are training and recruiting local contractors who will then have the task of clearing specific areas. They will also revisit the sites one month after the initial clearing to ensure that the creepers are not growing back,” Doudee told SNA.

The training being held at the Sans Soucis consists of theoretical and practical sessions, with emphasis on the most efficient way of eradicating the invasive species. The Parks Authority is expected to conduct training and recruit contractors on the second and third most populated islands -- Praslin and La Digue, respectively.

The three aggressive creepers are all introduced flowering plants in Seychelles, an archipelago in the western Indian Ocean. The trumpet is native to the eastern United States, the devil’s ivy is from French Polynesia, and merremia is a genus of flowering plants in the morning glory family.

“We have to uproot these plants, and in some cases such as with the merremia we have to dig and remove its feeders,” said Doudee adding that, “just cutting these creepers will only allow these invasive species to grow back.”

Five local contractors will start work in two weeks times after their contracts have been sorted out. They will work at five different locations where these creepers are more rampant.

Doudee said that in the past the campaigns to control these plants failed because of a lack of follow up.

The project will be implemented over a five-year period where every year five new contractors will be recruited and work in five new locations and will also include Praslin and La Digue.

A few years back there was an attempt to control the Philodendron creepers in the Vallee de Mai, a world heritage site on Praslin. Herbicide was inserted at the base of the plant, which over time killed the creeper.