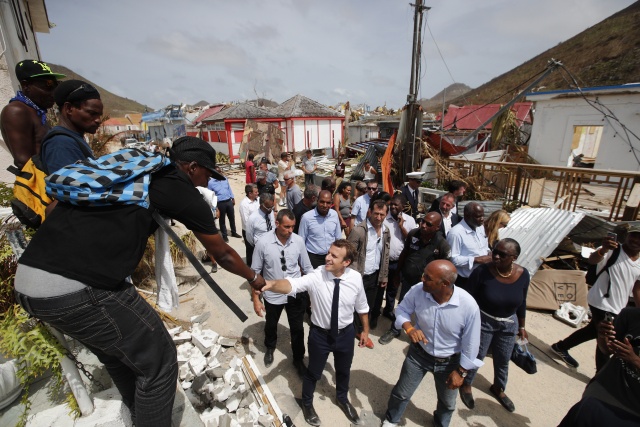 Macron's plane touched down in Saint Martin as anger grew over looting and lawlessness in the French-Dutch territory after Hurricane Irma.

Speaking in Guadeloupe earlier, Macron said the government began preparing "one of the biggest airlifts since World War II" days before Irma hit on Wednesday.

"Now is not the time for controversy," he said, adding: "Returning life to normal is the absolute priority."

The French, British and Dutch governments have faced criticism for failing to anticipate the disaster, with an editorial in The Telegraph newspaper calling the response "appallingly slow."

Touring Saint Martin, Macron was at times jeered by people waiting for aid supplies or hoping to catch flights for France in order to escape the devastation across the island.

"We've been here since six in the morning and we're still waiting, under a blazing sun," said one woman in a crowd of people hoping to leave as soon as possible.

Another woman asked: "Why are you here?"

But Macron said that "everybody who wants to leave will be able to," with officials saying that about 2,000 of the 35,000 residents on the French side of Saint Martin had already left in recent days.

Johnson arrived Tuesday in Bridgetown, the capital of Barbados, where he met with some of the nearly 1,000 military personnel sent to bolster relief efforts and security.

He was also expected to visit the British Virgin Islands and Anguilla.

"The UK is going to be with you for the long term," Johnson had told residents in a video message.

He has dismissed the criticism as "completely unjustified," calling the relief effort "unprecedented."

King Willem-Alexander of the Netherlands is already in the region, which bore the brunt of one of the most powerful storms on record.

He toured Sint Maarten, the Dutch section of the island, on Monday, before meeting residents on Saba island Tuesday. He was set to travel on to Sint Eustatius, which suffered severe damage.

The Dutch Red Cross has raised 3.2 million euros ($3.8 million) for the devastated islands in under a week.

Dutch Major-General Richard Oppelaar said 200 tonnes of aid had been delivered, while 750 people have been evacuated from Sint Maarten.

"The security situation remains precarious, but seems to steadily be improving," he said. "We are trying our best to act in situations (of looting), and have had several people detained."

A detention center at Point Blanche that holds about 130 prisoners was badly damaged but no detainees escaped, Dutch officials said.

The death toll from Irma stood at more than 40.

Fifteen were killed on Saint Martin and neighbouring Saint Barthelemy, 10 in Cuba, nine in the British Caribbean islands, four in the US Virgin Islands, two in Puerto Rico, one in Barbuda and one in Haiti.

Islanders have complained of a breakdown in law and order and widespread shortages of food, water and electricity.

A mother picking up her daughter, a survivor who flew to Paris on Monday, said government help was non-existent on Saint Martin.

"They gave us phone numbers but they didn't work. Only social media and solidarity worked," said the woman, who spoke on condition of anonymity.

"People were left to their own devices. They had to set up militias and take turns defending themselves" against looters, she said.

"All the gangs came to the French side... with guns and machetes. It's unbelievably chaotic."

Macron, who is due to visit Saint Barthelemy Wednesday, said he wanted to "disarm" St. Martin.

"There is an endemic problem on the island, that preexisted this crisis, which is weapons," he said. "It's a challenge we must face."

Briton Claudia Knight said her partner Leo Whitting, 38, was stranded on Tortola, one of the British Virgin Islands.

"Everyone's turned feral and no one's going out without being armed... It's turning really nasty," she told the Press Association news agency.

"Leo carries a knife with him."

The Dutch king spoke of his horror at what he found.

"Even from the plane I saw something I have never seen before," he told public newscaster NOS.

"I have seen proper war as well as natural disasters before, but I've never seen anything like this."

The British Overseas Territories in the Caribbean are highly dependent on aid, making them what The Times called "an expensive legacy of empire."

In France, opposition figures have accused Macron's fledgling government of bungling the response to the disaster.

Radical leftist Jean-Luc Melenchon has called for a parliamentary inquiry and far-right leader Marine Le Pen said the government had left islanders to "fend for themselves."

There has also been criticism of the Dutch response.

"They reacted far too late. The French were much quicker on Saint Martin to evacuate people," tourist Kitty Algra told Dutch newspaper AD.