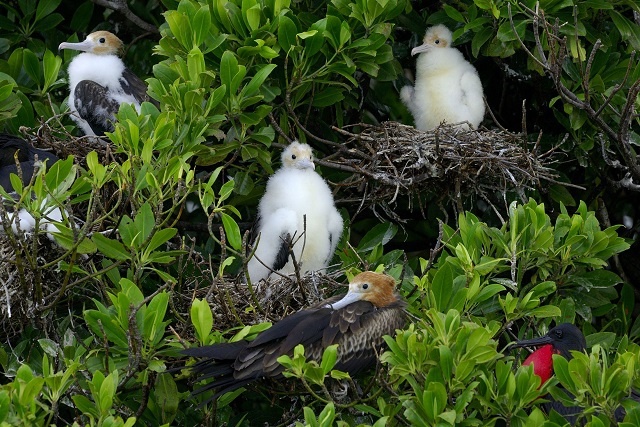 The Seychelles Islands Foundation (SIF) plans to conduct an in-depth study on the breeding cycle of frigatebirds one of the most populous species in Seychelles found on the Aldabra atoll.

The Aldabra research team will follow each of the four frigatebirds colonies for two years through the various stages of their breeding cycles.

“This is because frigatebirds have a long breeding cycle. It can take up to 18 months for a pair to produce a fully independent chick, so a study period of two years is the minimum length of time required to document all the stages of the breeding cycle,” said Lorraine Cook, a volunteer working on the frigatebirds programme.

The name frigate comes from the French word "frégate," meaning a fast warship in association with the way the bird flies head extended and swiftly takes its prey out of the sea without touching the water.

The frigatebirds which have long wings and fork tails with slender hooked bills breed in Aldabra atoll, one of the Seychelles UNESCO world heritage sites located 1,120 kilometres southwest of the main island of Mahe. The atoll hosts one of the world’s largest population of the species.

The foundation conducted a census of the breeding population once a year since 2011 and estimates that between 6,000 and 11,000 birds attempt to breed each year. The numbers fluctuate due to factors like food availability and irregular breeding.

However, the census misses birds that have finished breeding or whose breeding attempt failed or are hidden by vegetation. The new in-depth study will increase current knowledge of frigatebirds breeding cycles, which in turn will assist the Foundation in producing a more accurate estimate of the population.

“Over the next two years we will learn how breeding stages differ between greater and lesser frigatebirds and also how they have changed since the last detailed study that was carried out 40 years ago,” said Cook.

The volunteer working on the Frigatebirds programme said the study will also enable the Foundation to get a picture of how the two species are distributed across the atoll.

“This information will help us to manage activities around breeding colonies in order to avoid times when breeding birds are most sensitive to disturbance,” said Cook.

She added that the research team will carry out the monitoring through visiting the colony every four weeks.

“At each visit, the team will count the numbers of birds within a small subsection on the colony, assigning birds to categories based on species and different stages of the frigatebird breeding cycle,” Cook said.

By observing the numbers of birds in each of these stages throughout the year, the Foundation will be able to see when each stage starts, how long it lasts, when it peaks and how it differs between the two species on Aldabra -- the greater and the lesser frigatebirds.

The two species are closely related and look very similar except the greater frigatebirds are slightly larger but this is hard to notice while the lesser frigatebirds have a white band of feathers in the ‘armpits’ of their wings which can be seen easily when they are flying.

The Seychelles Islands Foundation has strict regulations associated with visiting the frigate colony areas, especially for tourists’ visits to Aldabra. The researchers and rangers working on this beautiful and wild atoll feel extremely fortunate to have the opportunity to get up close and personal with these majestic seabirds.

Cook said the research staff is excited to begin this project and learn more about their most common resident seabird. This is also the perfect time of year to begin monitoring as male birds are busy trying to attract a mate.