Innovative business in Seychelles to turn seaweed into fertiliser 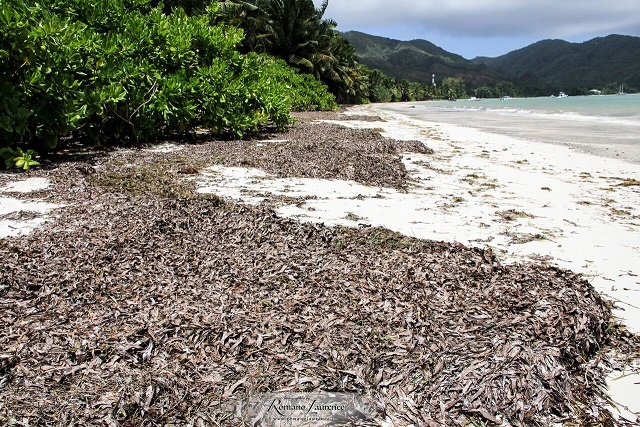 Seaweeds are torn from the sea bed and end up in piles on the beach when the sea in Seychelles is rough especially in the south east monsoon from May to October. (Romano Laurence)

(Seychelles News Agency) - A new factory on Praslin, the second-most populated island in Seychelles, is launching a new and innovative way to manage and make better use of seaweed: turning it into agricultural fertiliser.

Bernard Port-Louis told SNA that the business, called ‘Seaweed Seychelles,’ is the brainchild of his son Benjamin.

“He is currently in his final year at James Cook University in Townsville, Australia and has always believed in the sustainable development of our islands. So we have decided to develop the factory,” Port-Louis said.

“This new seaweed harvesting business will be collecting washed up seaweed, and processing it to extract the organic matter in liquid form,” he said, adding that seaweed will be collected from the inner islands.

Seaweeds are aquatic plants that live attached to rock or other hard substance in coastal areas, and the most common type found on the Seychelles beaches is ocean algae “sargassum” along with the sea grass. This happens on a large-scale during the south-east monsoon -- May to October -- when the sea is rough, and the algae are torn from the seabed and end up in piles on the beach.

The seaweed is not only an eyesore but is smelly and attracts flies which pose as a nuisance for people, especially beach visitors. In some areas where this problem is severe locals are contracted to clean and dispose of the seaweed.

The new factory, located on the man-made Eve island of Praslin, is near completion and Port-Louis said it is expected to be operational in two months.

Seaweed Seychelles will produce up to 8,000 litres of seaweed liquid per day, and according to Port-Louis, this will be sold to farmers as fertiliser.

Port-Louis said: “Once the liquid is extracted, the solid leftovers of the algae will be grounded to powder to produce soil conditioner, to ensure that there is no waste and all by products are fully utilised.”

This new venture has been endorsed by the Commonwealth Scientific and Industrial Research Organisation which is the federal government agency for scientific research in Australia.

The factory will be using green energy for all its operations and installed a solar hot water system that can produce 4000 litres of hot water and a 12-kilowatt photovoltaic solar system to produce electricity for the daily running operation.

According to an article in the 12th edition of the Saint Ange tourism report, "the accumulation of seaweed on some of the beaches (on Praslin) has become a serious issue, posing a great challenge for hoteliers who have been trying to market Seychelles as having white sandy beaches, and crystal clear waters."

Seaweed harvesting for processing is new in the Seychelles’ archipelago in the western Indian Ocean. The region, on the other hand, is known for seaweed farming, where this practice is common in Zanzibar, Tanzania, Madagascar and Mauritius.