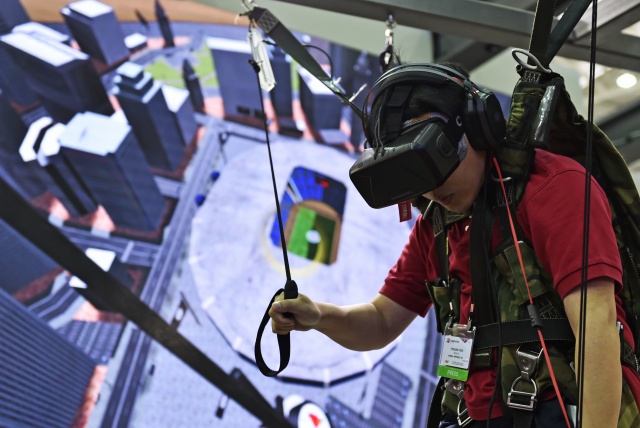 A visitor enjoys a visual reality (VR) headset simulating a parachutist during the annual Computex computer exhibition on May 31, 2016. New York, Singapore, Taipei, Barcelona and London are regarded now as what techies call “smart cities” due to efficient use of a speedy internet and wireless connections. (SAM YEH / AFP)

(AFP) - A few extra-keen cities in developed countries are using internet technology to cut energy bills, fight crime and ease traffic congestion. Now everyone else wants to know how they got so far.

New York, Singapore, Taipei, Barcelona and London are regarded now as what techies call “smart cities” due to efficient use of a speedy internet and wireless connections. Lesser known hotspots include Charlotte in the United States and Lyon, France. These cities make up just a partial list.

Policy and technology experts met 3,000 people at the 2017 World Congress on Information Technology in Taipei this week to share tips that might bring everyone else to the levels of these places.

“Generally, it is difficult to judge the overall progress that a city has made in adopting smart technologies,” said Jimmy Liu, an analyst with the market research firm TrendForce in Taipei. But “policy decisions, funding and technological capability” make a difference, he said.

Governments central or local must first kick in money, speakers at the Congress said. The U.S. government announced in 2015 a $160 million initiative to help cities become more connected, for example.

Funds often pay for infrastructure. They may also encourage local internet technology companies to invest, without leaving town, in ways that help the public, former French culture and communications minister Fleur Pellerin said at the event.

“If you let the private sector and the market operate, then it can happen that very promising tech teams do not find the financing because the projects are considered too risky,” she said.

A city should also decide it wants to be connected, speakers said. That way it requires departments to share data and collect the same from private firms electronically for use in something such as energy reduction. India, for instance, has pledged to wire 100 cities so they can attract foreign investment.

Cities in developed countries with mature 4G mobile and Wi-Fi networks lead the world in use of high-tech to improve services, said Gan Dai-you, an analyst with the Market Intelligence & Consulting Institute in Taipei.

“Cities less connected and less smart are those either that lack complete infrastructure and funds, are prone to weather disasters, or have a government that requires redefining itself,” Gan said. Brazil and India grapple with weather, she noted.

Internet-based services should reach any rural areas, where 4G signals may be weak and networks more expensive to build per end user, to ensure they feel included, speakers added. Rural populations are often the hardest to reach in a disaster where rescue is aided by new technology, noted Congress speaker Noah Kroloff, principal of the American security consultancy Global Security and Innovative Strategies.

A well connected city pays in a list of ways. Some cities can rescue people in disasters and solve crimes faster now, speakers said at the Leaders’ Roundtable during the 21st Congress on Monday. Cities can save energy by rigging up an internet-of-things system to monitor electricity used by common home appliances.

“You don’t know if your home refrigerator is an energy waster,” said Taiwan government Minister without Portfolio Wu Tsung-Tsong, one of Monday’s panelists. “Now with smart meters, one at the power company and the other in your home, you can have a set to let your home conserve.”

Tsai’s government wants to shift from pure hardware, which Taiwan’s exporter rivals can make more cheaply, toward software and development of internet-of-things technology. To help get there, by 2023 Taiwan will open a zone near Taipei called Asian Silicon Valley for tech startups, university-industry cooperation and internet-of-things firms.

In New York City, instantaneous flow of inter-agency data has helped police send “the officer closest to the site of the shooting when receiving the alarms via their smartphones and tablets,” Gan said.

And in the American city Charlotte, 60 buildings use meters that collect energy consumption data. Users can visit kiosks in those buildings to see the cloud-stored data along with advice on cutting consumption. The city reduced power usage by 8.4 percent in two years, the company network Smart Cities Council says on its website.

And in Taiwan’s capital Taipei, the city government is working on new equipment for electric vehicles and testing self-driving buses.