All eyes on Trump as world leaders gather at UN 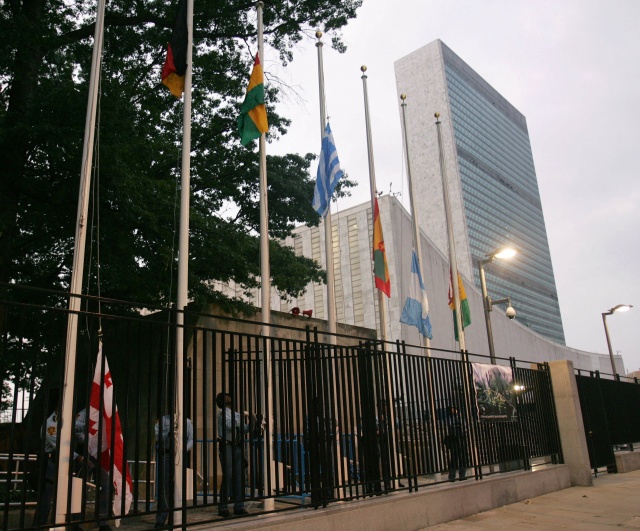 World leaders will gather at the United Nations Building in New York next week to discuss the nuclear crisis with North Korea, the future of the Iran nuclear deal and Myanmar's military crackdown against Rohingya Muslims, amongst other issues.
(DON EMMERT / AFP)

(AFP) - Donald Trump takes center stage at the United Nations next week when world leaders gather in New York, anxious to hear the US president outline how he is reshaping Washington's role in global affairs.

The nuclear crisis with North Korea, the future of the Iran nuclear deal and Myanmar's military crackdown against Rohingya Muslims are expected to top the agenda at the world's biggest diplomatic gathering.

Trump will deliver his first address to the annual General Assembly high-level debate, which kicks off Tuesday with 129 heads of state and government set to attend.

But all eyes will be on Trump, whose election last year was described as a political earthquake by UN diplomats now struggling with unclear US policies on global crises, from Syria to South Sudan.

Washington's friends and foes have been grappling with the implications of Trump's "America-First" policy and his address will be closely-watched for signs of what's in store.

While Trump is expected to play to a domestic audience by reasserting the themes that have made him popular at home, diplomats are not ruling out some signs of a shift, on climate change, for instance.

The United States sparked global outrage when it announced in June that it was pulling out of the Paris climate agreement, but that process will take three years, allowing time for a re-think.

"Expectations are low, but that may play to Trump's advantage" said Richard Gowan, a UN expert from the European Council of Foreign Relations.

"If he makes any friendly gestures, like hinting that the US could actually stay in the Paris climate change agreement with a few tweaks, he will be acclaimed as a statesman."

"Globally, public opinions of the president are pretty low," said Martin Edwards, a UN expert at Seton Hall University. "I expect the tone to be off-putting rather than engaging."

On Tuesday, the French president will take the podium just a few speakers after Trump and deliver an address that will champion multilateralism and renew his call of action on climate change.

Macron "can roll out an inspiring vision of global cooperation to eclipse the US president," said Gowan.

"If Trump crashes and burns with a really nasty speech, Macron will look particularly good."

During the myriad of bilateral meetings, North Korea's missile and nuclear tests will be in the spotlight after Russia and China agreed to back a US push for tougher UN sanctions against Pyongyang.

The North Korean crisis has pushed the war in Syria off the top of the global agenda, but there is no agreement among big powers on the diplomatic steps needed to avoid war.

North Korea's Foreign Minister Ri Yong-ho is set to defend his country's nuclear drive during his address on Friday. Ri is expected to meet with Guterres, who has offered to act as mediator.

On Syria, allies will press Trump to come up with a broader strategy beyond leading the coalition that is fighting the Islamic State (IS) group.

There will be also be calls from Washington's partners who signed the Iran nuclear deal to salvage the agreement.

The plight of Myanmar's Rohingya Muslims fleeing a military campaign in Rakhine state will also be discussed, with the UN Security Council weighing a tougher response after calling for an end to the violence.

On Monday, Trump will host a meeting of about 100 world leaders on reforming the United Nations at an event attended by his influential UN ambassador Nikki Haley and Guterres.

The UN's number one financial backer, the United States has threatened deep cuts to UN funding and Haley was a driving force behind a $600-million-dollar cut to the UN peacekeeping budget this year.

At a news conference this week, the UN chief said he was hoping for a "constructive" message from Trump about the United Nations, the global body the US president once disparaged as a "club" for "people to have a good time."

"I hope that if that is the message that will be conveyed, that that message will be well received," Guterres said.

General » Be a reporter: Write and send your article » Subscribe for news alert
Tags: UN, assembly, US, diplomacy