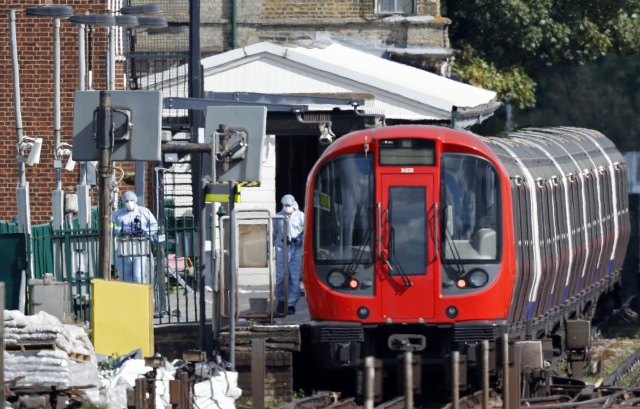 (AFP) - British police raced Saturday to track down whoever planted a bomb on a packed London Underground train, as authorities raised the national threat level to maximum, meaning another attack may be imminent.

Friday morning's blast, which left 29 people injured, was Britain's fifth terror attack in six months and was claimed by the Islamic State group.

Prime Minister Theresa May announced late Friday that the threat level had been raised to "critical", and said troops would take over guarding key sites to free police officers for deployment elsewhere.

The explosion at Parsons Green station in south-west London sparked a "wall of fire" that left passengers with burns and caused a stampede of panicking people in which some were trampled.

No-one has yet been arrested over the bombing, but anti-terrorism police chief Mark Rowley said the investigation was making "really good progress".

"Somebody has planted this improvised explosive device on the Tube. We have to be open-minded at this stage about him and potential associates."

May said military personnel would take over guard duty at certain closed "protected sites", freeing up 1,000 police officers to be deployed on the transport network and on streets across Britain.

The country was last on critical alert after the bombing at a concert in Manchester in May, which was also claimed by the IS group.

In a statement Friday, the group said an IS "detachment" had carried out the London attack.

Rowley earlier said most of the injuries were due to "flash burns", while others were wounded as passengers ran out of the station in panic.

Witness Charlie Craven told AFP he heard a "massive bang", adding: "I saw an orange sort of fireball encompassing the whole Tube coming towards you."

Another, Lauren Hubbard, described it as "a wall of fire".

Twitter user @Rrigs posted pictures of a white bucket smouldering on the train and described how a "fireball flew down carriage and we just jumped out open door".

The bucket, which was inside a frozen food bag from the budget supermarket chain Lidl, looked like the type used by builders and there appeared to be cables coming out of it.

US President Donald Trump said that "loser terrorists" were behind the attack, adding that they were already "in the sights" of British police.

London's Metropolitan Police dismissed the tweet as "unhelpful speculation", while May also rebuked him.

"I never think it's helpful for anybody to speculate on what is an ongoing investigation," she said, speaking after an emergency meeting of senior ministers.

May said the device was "clearly intended to cause significant harm", condemning it as a "cowardly attack".

Speaking on Friday evening, Rowley said the remnants of the bomb were being examined by forensic scientists.

British media reported that it had a timer but failed to detonate fully.

Hans Michels, a professor of chemical engineering at Imperial College, said the flash flame "suggests that the explosion was only partly successful".

"Much of the bucket still seems to be intact and there appear to be no victims with lethal impact wounds," he said.

Twenty-nine victims were treated in hospital, although health authorities said none were in a serious life-threatening condition, and eight were released on Friday.

Louis Hather, 21, had been travelling to work and was three carriages down from where the explosion took place.

"I could smell the burning. Like when you burn plastic," he told AFP.

He was trampled on as passengers stampeded out of the station and his leg was badly cut and bruised.

Sally Faulding, a 51-year-old teacher, said: "People were falling over each other."

The area around Parsons Green station -- a quiet and wealthy residential district, filled with chic cafes -- was evacuated for most of the day.

Local residents and businesses rallied together to offer tea, phone charging points, and the use of their toilets to people unable to get home.

Four previous attacks in London and Manchester this year claimed the lives of 35 people.

Three of those attacks involved a vehicle ploughing into pedestrians.

The other attack was a bombing in May at a pop concert by US star Ariana Grande in Manchester which killed 22 people, including several children.

General » Be a reporter: Write and send your article » Subscribe for news alert
Tags: Britain, attacks