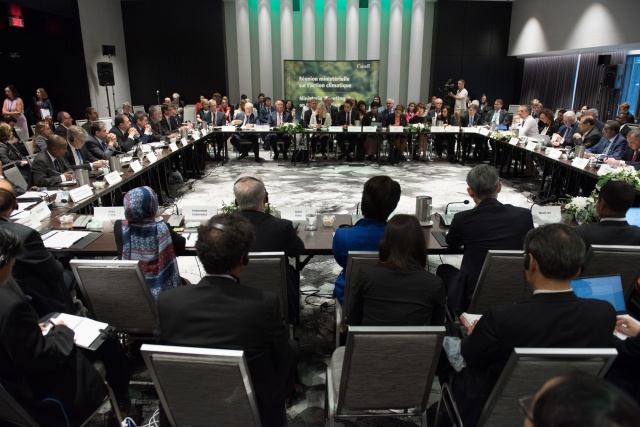 A general view shows the meeting Canada is hosting in Montreal on September 16, 2017 with 30 environment ministers aiming to push forward on the Paris climate accord, despite the United States' withdrawal. The meeting was requested by Canada, China and the European Union with more than half of G20 members attending -- representing most of the world's largest economies.
Nearly 200 countries agreed in Paris at the end of 2015 to limit or reduce carbon dioxide emissions with the aim of keeping the rise in average global temperatures to no more than 1.5 degrees Celsius by 2050, compared to preindustrial levels.
(Alice CHICHE / AFP)

(AFP) - The White House pushed back Saturday at a European suggestion it was softening its stance on the Paris climate accord, insisting Washington will withdraw from the agreement unless it can re-enter on more favorable terms.

The remark came as environment ministers from some 30 countries gathered in Montreal seeking headway on the Paris climate accord, which President Donald Trump had pulled out of in June.

At the summit, which was attended by a US observer, the US "stated that they will not renegotiate the Paris Accord, but they (will) try to review the terms on which they could be engaged under this agreement," the European Union's top climate official Miguel Arias Canete said.

Canete said there would be a meeting on the sidelines of next week's UN General Assembly with American representatives "to assess what is the real US position," noting "it's a message which is quite different to the one we heard from President Trump in the past."

The US observer was not immediately available for comment and the White House insisted the United States would withdraw from the Paris climate accord without more favorable terms.

"There has been no change in the United States' position on the Paris agreement," White House spokeswoman Sarah Huckabee Sanders said in an email.

"As the president has made abundantly clear, the United States is withdrawing unless we can re-enter on terms that are more favorable to our country," she said.

Called by Canada, China and the European Union, the summit took place 30 years to the day after the signing of the Montreal Protocol on protecting the ozone layer -- which Canada's environment minister hailed as a multilateral "success story" by governments, NGOs and ordinary citizens jointly tackling a major global threat.

We "committed to full implementation of the Paris Accord. Everyone agreed that the environment and the economy go together, they are linked. You cannot grow the economy without taking care of the environment," Catherine McKenna said at the end of the summit, attended by more than half the G20 members as well as some of the nations most vulnerable to climate change -- from the low-lying Marshall Islands and Maldives to impoverished Mali and Ethiopia.

"Changes are real, extreme weather events are more frequent, more powerful and more distressful," she told the gathering, pointing at the devastation wrought by mega-storms such as Harvey and Irma which many climate scientists believe are boosted by global warming.

Nearly 200 countries agreed in Paris in December 2015 to curb carbon dioxide emissions with the aim of limiting the rise in average global temperatures to 1.5 degrees Celsius by 2050, compared to preindustrial levels.

When Trump decided in June to withdraw, Canada, China and the European Union immediately reaffirmed their respective commitments to the pact, which the Group of 20 declared "irreversible" the following month.

Time is ticking, Canete told AFP, as ministers work to narrow their differences and better understand how to implement the ambitious accord -- with less than two months to go until the next UN Conference on Climate Change (COP23), in Bonn in November.

"We need a rule book to be able to monitor and verify and compare emissions of all the parties and see how far we are towards the targets," Canete said, with a goal of having those rules in place in time for the COP24 meeting in Katowice, Poland in late 2018.

Key player China -- the world's largest car market -- brings to the table a potentially major advance in transportation after announcing its intention to ban gasoline and diesel-fueled cars, following decisions by France and Britain to outlaw their sale from 2040.

The European Union -- which is targeting a 40 percent cut to its emissions by 2030 -- will also shortly put forward a proposal to member states on slashing carbon emissions in the transportation sector, European Commission President Jean-Claude Juncker said this week.

And Canada -- as the world's sixth-largest oil producer -- insists it is "committed to its international climate obligations," which it hopes to reach by massively investing in "clean energy" technologies.

China's special representative to the talks, Xie Zhenhua, said Beijing considers the Montreal Protocol to be a "very effective and efficient" example of multilateral action on the environment -- largely because it rested on a broad consensus.

"We should take actions now," Xie said, "to ensure that we can realize the goals that we have set."

"The key issue is how we should combine climate actions with economic growth, the protection of people and job creation," he added.

"If we can combine all these matters we could make Paris agreement a great success."