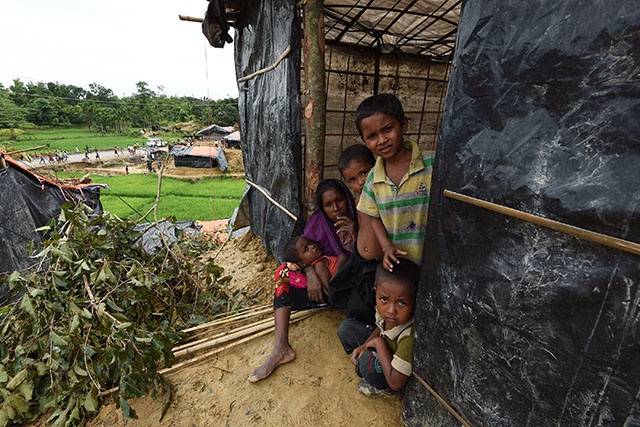 (AFP) - Pressure tightened on Myanmar Monday as a rights group urged world leaders to impose sanctions on the country's military, which is accused of driving out more than 400,000 Rohingya Muslims in an orchestrated "ethnic cleansing" campaign.

The call from Human Rights Watch came as the UN General Assembly prepared to convene in New York, with the ongoing crisis in Myanmar billed as one of most pressing topics.

The mass exodus of Rohingya refugees to neighbouring Bangladesh has billowed into an humanitarian emergency as aid groups struggle to provide relief to a daily stream of new arrivals, more than half of whom are children.

There are acute shortages of nearly all forms of aid, with many Rohingya huddling under tarps as their only protection from monsoon rains.

Myanmar's government hinted Sunday that would not take back all who fled across the border, accusing those refugees of having links to militants whose raids on police posts in August set off the army backlash.

Any moves to block the refugees' return will likely inflame Bangladesh Prime Minister Sheik Hasina, who will press the UN General Assembly for more global pressure on Myanmar to repatriate all of the Rohingya massing in shantytowns along her border.

Human Rights Watch also called for the "safe and voluntary return" of the displaced as it urged governments around the globe to punish Myanmar's army with sanctions for the "ongoing atrocities" against the Rohingya.

"The United Nations Security Council and concerned countries should impose targeted sanctions and an arms embargo on the Burmese military to end its ethnic cleansing campaign against Rohingya Muslims," the group said in a statement.

It called on the UN General Assembly to make the crisis a priority, urging countries to issue travel bans and asset freezes on Myanmar officers implicated in the abuses, as well as expand arms emargoes.

Myanmar's government has defended the military campaign as a legitimate crackdown on the Rohingya militants, who first emerged as a fighting force last October.

On Sunday Myanmar's Information Committee accused those who fled to Bangladesh -- more than a third of the Rohingya population -- of working in cahoots with the Rohingya militia, a rag-tag group of fighters armed with mostly rudimentary weapons.

"Those who fled the villages made their way to the other country for fear of being arrested as they got involved in the violent attacks," the statement said.

"Legal protection will be given to the villages whose residents did not flee," it added.

The violence has gutted large swaths of northern Rahkine in just over three weeks, with fires visible almost daily across the border from the Bangladesh camps.

Some 30,000 ethnic Rakhine Buddhists and Hindus have also been displaced by the unrest.

While the world has watched the refugee crisis unfold with horror, there is little sympathy for the Rohingya inside mainly Buddhist Myanmar.

Many Buddhists revile the group and have long denied the existence of a Rohingya ethnicity, insisting they are illegal immigrants from Bangladesh.