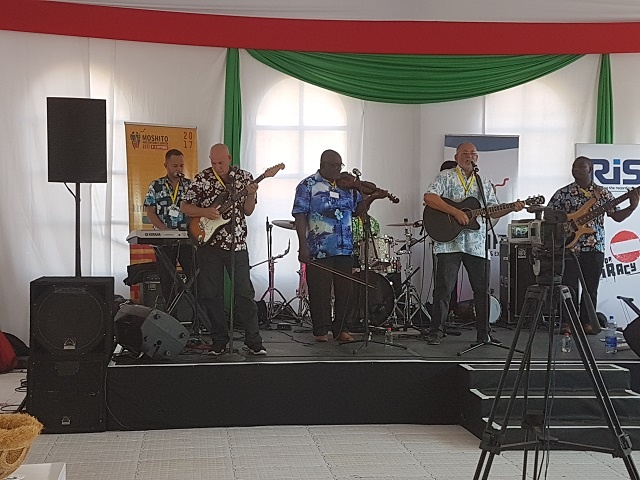 (Seychelles News Agency) - A delegation from Seychelles recently attended a music conference in South Africa on the importance of traditional music.

The delegation, including members of the traditional group ‘Zez,’ participated in the Moshito Music Conference and Exhibition last week under the theme ‘rhythms of the ancients.’

“Zez, which specialises in traditional music such as the kamtole, moutya and sega, performed at the opening night concert and at a street festival held on the last day of Moshito,” said Jimmy Savy, who led the delegation.

Savy added that “the band with its traditional music was chosen as the Moshito conference wanted to explore and look at how ancient rhythms and indigenous sounds made African great music and still find its place in modern music.”

The Moshito Music Conference and Exhibition is an annual event held in Johannesburg, South Africa. It is a platform for music industry practitioners, musicians, festival promoters, booking agents, music managers, from over 15 international markets.

The event, held from September 6 – 9, presented participants the opportunity to come together, discover talents and strike deals for the growth of the creative industries in the region.

The event included workshops where developments and innovation in the music industry especially in Africa were discussed and in which Savy highlighted how Seychelles celebrates its ancient rhythms through the annual Creole festival.

Seychelles was able to participate in the event through a new partnership agreement that the National Arts Councils signed with its South African counterpart in May.

Savy said now that Seychelles has made its name at the event, “it would be easier for local artists and band engage and network with South Africans and others from the region.” He added that “with the agreement with their national council we hope our Seychellois can even organise tours.”

A delegation from the South African National Arts Council will visit Seychelles, a group of 115 islands in the western Indian Ocean, this November for a working mission and discussion on further collaborations.

Earlier this year artists from Seychelles attended the international music market (Midem) in France where they got the opportunity to discuss way on how to export local music and also prepare for next year’s event.

It was a first time that a Seychellois delegation attended the ‘Marché International du Disque et de l'Edition Musicale,’ known as Midem, which took place in Cannes, the French city well known for its international film festival.

Savy said that Seychelles' participation in these international and regional events is to give local artists and musician’s exposure as well as experience so that in the long run they can develop and market their talents and potentials to the maximum.

“We will be using the experience gained and the information we have gathered to network with the right people, develop the right contacts which will help us to produce the right music which can succeed on a worldwide scale.”