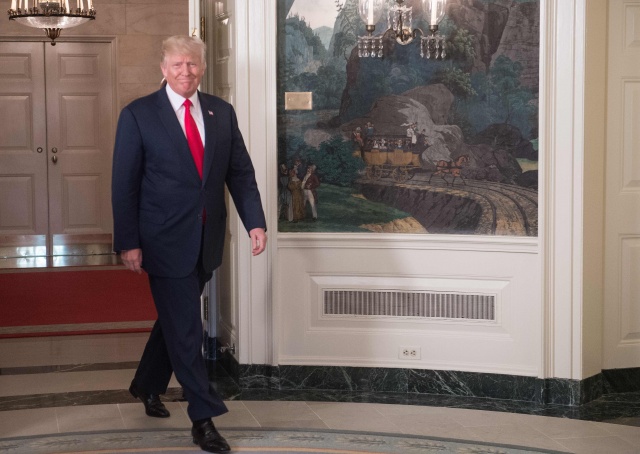 US President Donald Trump arrives to make a statement in the Diplomatic Room at the White House in Washington, DC, on August 14, 2017. (NICHOLAS KAMM / AFP)

The wiretapping continued until at least early this year, a period when Manafort was known to talk to Trump, the report said.

It was unclear whether Trump himself was picked up by the wiretaps.

Trump previously has accused former president Barack Obama of secretly listening in to communications at Trump Tower during the US presidential campaign, but the Justice Department said earlier this month there was no evidence to support that claim.

Manafort, a political consultant who had worked for Ukraine's former ruling party, was chairman of the Trump campaign from June to August 2016.

CNN cited three sources as saying that communications collected with the Manafort wiretaps sparked concerns among investigators that he had encouraged the Russians to help with the campaign.

Two of the sources, however, said the evidence was not conclusive.

Manafort was first placed under surveillance in 2014 after he became a subject of an FBI investigation into work Washington consulting groups had done for Ukraine's former ruling party, CNN said.

It was discontinued in 2016 for lack of evidence and then restarted under a new warrant that extended at least into early this year.

The second warrant was related to the FBI's investigation into contacts between Trump campaign associates and Russian operatives, sources told CNN.

General » Be a reporter: Write and send your article » Subscribe for news alert
Tags: US, politics, Russia, probe, Manafort