Trump's fiery UN address redefines US role in the world 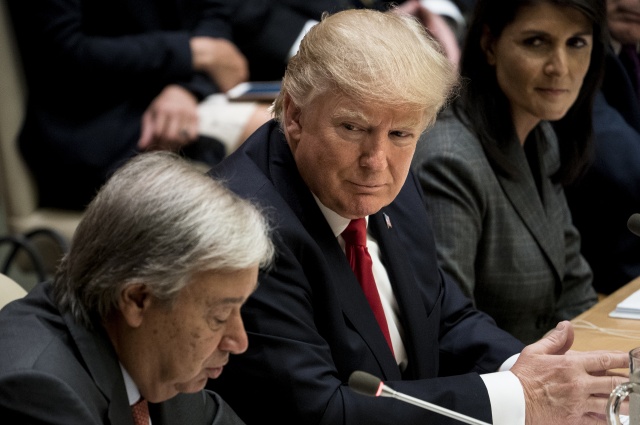 (AFP) - President Donald Trump's debut speech at the United Nations featured saber-rattling aplenty, but it also showed glimmers of a Trump doctrine that could transform America's place in the world.

It was described by one observer as a "42-minute tweetstorm" and by another as president George W. Bush's "'axis of evil' speech on steroids."

But in most respects, Trump's first stint before the green marble rostrum was everything you might expect from the truculent, norm-shattering businessman-turned-politician.

It was decidedly not what anyone would have expected from any of his 44 predecessors as president of the United States, and heralded a new style of American leadership in the global arena.

Trump's rhetoric -- dubbing Kim Jong-un a "rocket man" on a "suicide mission" -- was lapped up by supporters at home, but left allies around the world bewildered at the change that has gripped the world's only superpower.

Beyond the bellicose style, Trump demanded a change in substance, making it clear he wants to turn the clock back on the last half-century's growth of global rules and global institutions and return to the primacy of the nation state.

Trump's remarks used the words "sovereign" or "sovereignty" 21 times, rhetoric more often deployed in modern times by China to deflect criticism of a domestic crackdown or by Russia to deride US interference in domestic affairs.

Aides say Trump's call for a strong nation state was not a rejection of multilateralism per se, but rather a rejection of a globalism that dilutes the will of the people.

Allies were left with a renewed sense that "America First" will mean America alone.

"In America, we do not seek to impose our way of life on anyone, but rather to let it shine as an example for everyone to watch," Trump said.

Top Trump advisors had billed the address as "deeply philosophical," setting out an intellectual framework for the president's long-held world view.

For the White House, that idea is a useful counterpoint to critics who say Trump has no intellectual heft, and a beginning to build an ideological legacy that could survive beyond one presidency.

But it also reflects the continued influence of nationalist ideas inside Trump's White House, even after the departure of controversial aide Steve Bannon.

The speech also showed the continued influence of advisors like Stephen Miller, who played a major role in drafting the address, and appears to be following in the footsteps of Barack Obama aide Ben Rhodes, who developed a huge amount of power by wielding the speechwriter's pen.

But Washington's foreign policy establishment -- not predisposed to praise Trump -- pointed to numerous contradictions that put a question mark over the creation of any cohesive "Trump doctrine."

While insisting that America no longer builds democracies, Trump called for democracy to prevail in Iran and Venezuela.

Trump trashed the deal to curb Iran's nuclear program, but the White House has offered no clear attainable alternative beyond extending it in perpetuity.

US officials privately admit that any military option against North Korea would be potentially disastrous for allies in South Korea, within range of Pyongyang artillery loaded with chemical weapons.

"He comes across as a man with no plan," said Thomas Wright of the Brookings Institution. "It will be seen as weak and directionless and full of bluster."

Above all, Trump's critics question whether the clock can be rolled back to philosophies that dominated the less globalized world of the early 1900s.

"Sovereignty in our era fundamentally requires close cooperation with other nations and with strong global institutions, which President Trump rejects," said Barry Pavel, a veteran of policymaker in Republican and Democratic administrations now with the Atlantic Council.

That thinking still resonates with many of the diplomats, commanding officers and spooks -- those dubbed the deep state by Trump supporters -- who have largely continued with business as usual, despite the new White House occupants.

Even Trump's closest lieutenants, from Defense Secretary James Mattis to Vice President Mike Pence, have -- without directly contradicting Trump -- shaved off the rougher edges of his rhetoric.

And, so far, Trump's actions do not match his words. He has ripped up a trans-Pacific trade pact, but despite criticism has not yet left left the Paris climate accord or collapsed the Iran accord by reintroducing sanctions.

That may change in the coming months as Trump's team transposes speeches like that at the UN or in Warsaw and Riyadh into a formal National Security Strategy.

General » Be a reporter: Write and send your article » Subscribe for news alert
Tags: UN, assembly, US, Trump