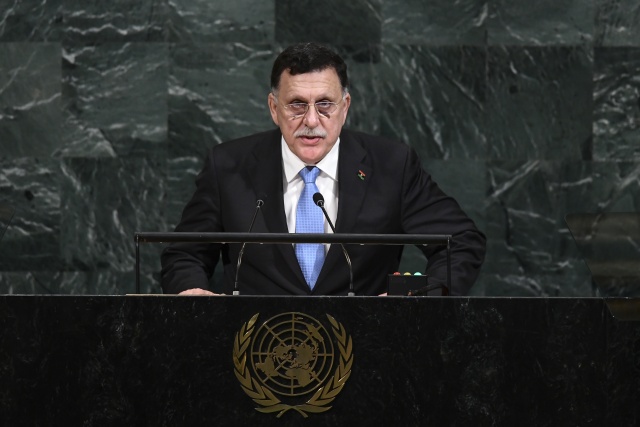 The head of Libya's UN-backed Government of National Accord, Fayez al-Serraj, addresses the 72nd Session of the United Nations General assembly at the UN headquarters in New York on September 20, 2017. (Jewel SAMAD / AFP)

(AFP) - The United Nations on Wednesday launched a new push to bring stability to Libya, which has been ravaged by chaos since the 2011 ouster of longtime leader Moamer Kadhafi.

UN Secretary General Antonio Guterres and a new UN envoy on Libya, Ghassan Salame, met on the sidelines of the UN General Assembly with countries involved with the country's troubles.

"It is my deep belief that circumstances are now created in a way that allow for a solution to be possible," Guterres told the meeting.

"I don't think we can miss this opportunity. I want to ask all of you to commit very strongly to a common effort to make sure that we do everything we can to help our Libyan friends to come together and to find a future of peace, democracy, freedom and prosperity," he said.

The initiative aims to set up a roadmap that starts with amending a December 2015 deal that set up an interim government of national accord. Despite the agreement, Libya remains divided.

Fayez al-Sarraj, the embattled head of the unity government, said that the UN meeting agreed on the need for a government with authority over all of Libya.

"Everyone present reaffirmed that the backdrop for a solution must remain a political one," Sarraj said in an address afterward to the General Assembly.

He said he asked the UN envoy to "present us with a timeline and a clear message aimed at all those attempting to impede this process."

"They must understand there is no military solution," he said.

Guterres said that the United Nations had a series of priorities including ensuring a unified command structure and improving the provision of goods and services to Libyans.

The UN chief also said it was critical to provide support to the mass of migrants who have made the lawless country their launchpad into Europe.