6 endangered birds that you can still see in Seychelles 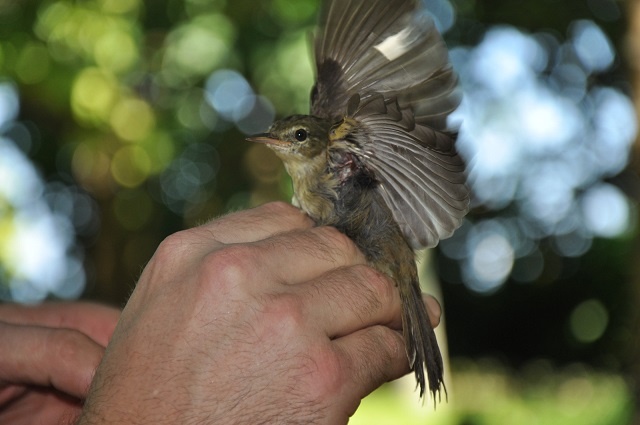 (Seychelles News Agency) - Seychelles is a small island nation whose economy is largely dependent on protecting its natural environment for tourism. The island nation’s government and various organisations are working hard to ensure the protection of the species endemic to the Seychelles.

This species is still critically endangered since it has an extremely small range and probably only one viable population persisting on an island where there has been a continuing decline in habitat.

After the successful reintroduction of birds to Denis Island, this species, which was more commonly found on La Digue, will warrant downlisting after five years if both populations are still self-sustaining.

Once down to a mere 26 individuals, the population of the Seychelles warbler, known in Creole as ‘Pti merl dezil,’ has been downlisted from critically endangered to near threatened on the International Union for Conservation of Nature's (IUCN's) red list of threatened species.

The small dull olive-and-brown coloured bird, with pale, buffish-yellow underparts and an obscure, buff eyebrow-stripe, has also been removed from BirdLife International’s Endangered Birds of the World list.

It is now found on five islands in Seychelles: Cousin, Cousine, Aride, Denis and Fregate and its population size is increasing owing to translocations and habitat management.

The species is listed as endangered because its population is extremely small, although it is increasing following intensive conservation efforts including translocations. The total number of birds has risen significantly, although it remains one of the rarest birds in the world.

The conservation of the magpie robin, which has a glossy black plumage with a patch of white on its wings, has greatly improved, but it still relies on conservation management. The species was down listed from being critically endangered to endangered in 2005 after great efforts to increase its population.

The Seychelles magpie robin can be found on Frégate, Denis, Cousin, Cousine and Aride.

The species was regarded as one of the most endangered birds of the Seychelles until 1997 when a thriving population was discovered on Conception Island. After research was carried out, the species was successfully introduced to Fregate Island. The conservation goal for the white eye is to ensure its survival on at least three and ideally more islands in viable, self-maintaining populations.

This species remains threatened but has been downlisted to Vulnerable, because it still has a very small population and is found in only a very small number of locations.

The Seychelles white eye -- a small grey bird, paler beneath with a narrow white ring around each eye -- can be found on Mahe, Conception, Fregate, North Island and Cousine.

The Seychelles scops owl was thought to be extinct for many years until it was discovered by a Nature Seychelles team in 1999. A survey conducted found that most of its habitat is now within the Morne Seychellois National Park where it is relatively protected.

This species is listed as endangered because it has a tiny range, occurring at six locations making it susceptible to unpredictable events. At present, there are no serious threats to the species' survival.

The small brown owl with a two-note rasping (frog-like) call which is active at night is mainly found in highland forests of Mahe, so it is rarely seen.

This species, now that the national bird of Seychelles is recognised as a distinct species, by the Birdlife International. It can be seen in the Vallee de mai on Praslin, one of the Seychelles UNESCO World Heritage sites, and the neighbouring Praslin National Park.

The black parrot, not truly black but brown-grey in colour, is listed as Vulnerable because, although it appears to be stable or possibly increasing, its population remains very small, and therefore at risk from unpredictable events and human impacts.