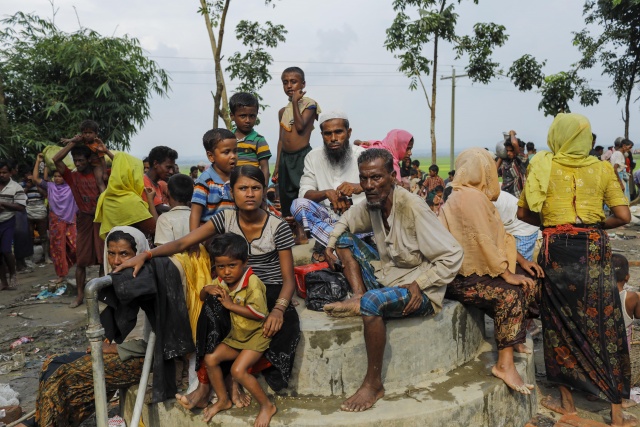 Rohingya refugees from Myanmar's Rakhine state look on after arriving near the Khanchon border crossing near the Bangladeshi town of Teknaf on September 5, 2017. Nearly 125,000 mostly Rohingya refugees have entered Bangladesh since a fresh upsurge of violence in Myanmar on August 25, the United Nations said September 5, as fears grow of a humanitarian crisis in the overstretched camps. The UN said 123,600 had crossed the border in the past 11 days from Myanmar's violence-wracked Rakhine state.(K M ASAD / AFP)

(AFP) - Bangladesh's Prime Minister Sheikh Hasina has issued a new call for Myanmar to take back the some 420,000 Rohingya Muslims who have fled violence in the Buddhist-dominated country.

Hasina, speaking to Bangladeshi activists in New York where she is attending the UN General Assembly, also called for greater international pressure on Myanmar over the new crisis which has unfolded in the past three weeks, media reports said.

"We have told Myanmar, they are your citizens, you must take them back, keep them safe, give them shelter, there should not be any oppression and torture," she told a meeting late Tuesday in New York.

The prime minister said Bangladesh was making diplomatic efforts to persuade Myanmar to take back the refugees.

"But the Myanmar government is not responding to the calls. Rather, Myanmar is laying landmines along the border to stop the return of Rohingyas to their homeland," she said.

Myanmar's de-facto leader Aung San Suu Kyi said in a speech hours earlier that the country would take back verified refugees. Myanmar considers the Rohingya illegal migrants from Bangladesh and refuses them citizenship, even though many have lived there for decades.

At a meeting of Islamic nations on the sidelines of the UN assembly, Hasina said Yangon was spearheading a state-sponsored propaganda campaign to call the Rohingya 'Bengalis', adding that they must be given Myanmar citizenship.

Hasina sought "urgent humanitarian assistance" from Muslim nations to cope with the influx of Rohingya who have fled what she called "ethnic cleansing", the state BSS news agency reported.

"It is an unbearable human catastrophe. I have visited them and listened to the stories of their grave sufferings, particularly of women and children," she said.

"I would like you all to come to Bangladesh and hear from them about the atrocities in Myanmar," she said.

The majority of of the refugees are women and children.

While Bangladesh has earned international praise for opening its doors to the Rohingyas, aid agencies have warning of a growing humanitarian crisis as authorities struggle to provide even basic facilities for the new arrivals.

The 420,000 now in makeshift shelters around the border town of Cox's Bazar have added to about 300,000 Rohingya who moved into camps in the region following earlier waves of violence in Myanmar.