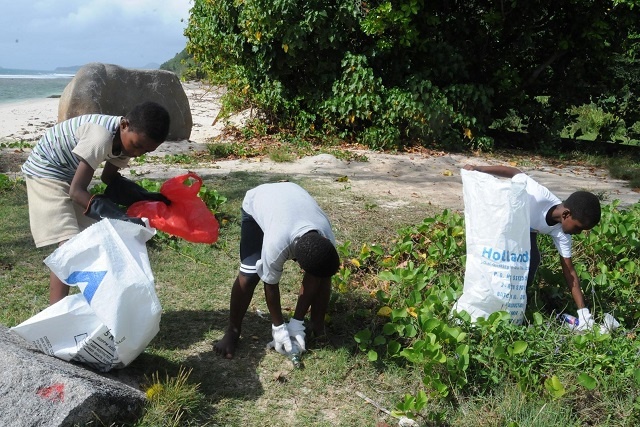 The authorities noticed the large number of glass bottles people have dumped into the environment during the ‘clean up the world’ campaign. (File Photo: Joena Bonnelame, Seychelles News Agency)

(Seychelles News Agency) - In a bid to reduce glass bottle waste in the Seychelles' open environment, a new initiative will be launched soon in which a fee will be paid upon the return of used bottles, a top official said.

“We are having a meeting to discuss which type of bottles we will start with and how much the redeemed fee will be,” said Alain Decommarmond, the principal secretary in the Ministry of Environment.

Decommarmond said that the authorities took the decision after they noticed the large number of glass bottles people have dumped in the environment during the ‘clean up the world’ campaign.

“We organised a team to clean the road leading to Espace building, and the two main items we saw were old styrofoam takeaway boxes and glass waste bottles,” said the principal secretary. He added that most of the bottles were those of imported alcoholic beverages.

Decommarmond said the initiative will include putting a levy of $0.1 (SCR 2) which will be applicable on the importation of glass bottle items.

The initiative will encourage residents in Seychelles, a group of 115 islands in the western Indian Ocean, to return their glass bottles at collection points called ‘redeem centres’ which will be announced soon.

“This will be areas where people can come to redeem their glass waste. It could be shops or specific redeem centres,” said Decommarmond.

A local company, Seychelles Breweries, has its own incentive whereby there is a deposit of $0.1 (SCR 2) on each bottle which is refunded when returned to any shop. Very few of those bottles are seen littering public areas.

Decomarmond said the initiative will increase the idea of glass recycling, thus, reducing the level of waste in the environment and those that are ending up in the landfill.

According to a 2016 provisional study of the landfill in Seychelles, 90 percent of the glass entering the country, mainly bottles, glassware and light bulbs, ends up in the landfill.

Another glass recycling initiative being done in Seychelles, a group of 115 islands in the western Indian Ocean, is by a local company -- Rogan’s Construction -- in partnership with a local not-for-profit organisation, Sustainability for Seychelles (S4S), where glass waste is collected and crushed using a crusher plant.

The glass bottle is made from four main ingredients -- sand, soda ash, limestone and other additives for colour or special treatments.  Too much of these components in the environment can cause potential damage to plants and animals.

The principal secretary said that recycling glass bottles is another step to strengthen the country’s commitment to fighting against pollution.