Anxiety mounts as clock ticks down on Mexico quake rescue 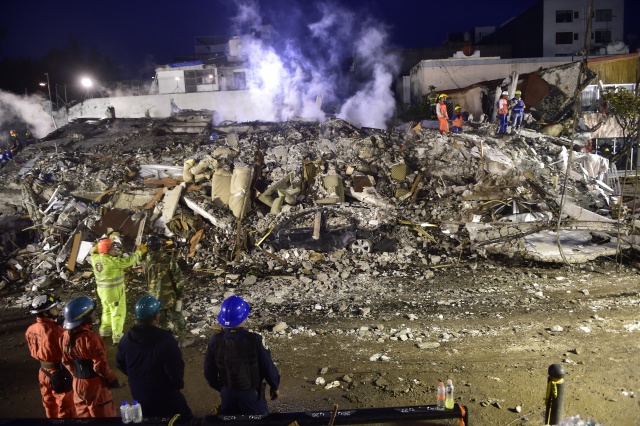 Rescue workers take part in the search for survivors and bodies in Mexico City on September 21, 2017, two days after a strong quake hit central Mexico. A powerful 7.1 earthquake shook Mexico City on Tuesday, causing panic among the megalopolis' 20 million inhabitants on the 32nd anniversary of a devastating 1985 quake.(Pedro Pardo / AFP)

(AFP) - Anxiety mounted Friday as Mexico approached the crucial 72-hour mark after a devastating earthquake that killed nearly 300 people, with exhausted rescuers racing to reach survivors trapped in the rubble before it is too late.

Anguished families watching and waiting at buildings that collapsed with their loved ones inside pleaded with authorities not to send in the bulldozers while there is still hope people could be alive inside -- something the government vowed not to do.

"We know she's alive and we're not leaving until she leaves with us," said Olinca Gonzalez, 29, whose father's wife worked in a Mexico City building that was flattened in Tuesday's 7.1-magnitude quake.

President Enrique Pena Nieto promised authorities were not giving up the search.

Experts say the average survival time in such disasters is 72 hours, depending on injuries. But trapped survivors have been known to hang on for many days more, including after a massive earthquake that devastated Mexico City in 1985, killing more than 10,000 people.

"The rescue and support effort in the buildings that collapsed is still on," Pena Nieto said during a visit to the state of Puebla, where the epicenter was.

"We are not suspending it. We have to keep up the rescue effort to keep finding survivors in the rubble."

Authorities put the death toll from Tuesday's quake at 286 people, but it was expected to rise further with scores still missing in Mexico City.

Volunteer rescuers working through their third straight night fought off growing fatigue to remove tons of rubble at dozens of flattened buildings in the capital and across several central states.

In the capital's central neighborhood of Roma, rescue workers scrambled to locate 23 people believed to be in the wreckage of a collapsed seven-story office building.

They have already pulled 28 survivors from the mountain of rubble.

Aaron Flores's sister Karen and friend Paulino Estrada were both trapped inside.

Estrada managed to contact his family by cell phone, even making a video call. But there has been no news from Karen Flores.

"We're feeling disoriented and desperate because we haven't heard anything from her," said her brother, 30.

At other locations, hope turned to grief.

"At 1:00 pm they pulled my mother's body out of the debris, but identified her under a different name, and it wasn't until 5:00 pm that they gave us the bad news," said Maria Dolores Martinez, 38, at a Mexico City morgue.

Highlighting the confusion on the ground, one story that gripped the world's attention turned out to be false: that of a girl supposedly trapped alive beneath the rubble of a school that collapsed in Mexico City.

"We have carried out a full count with the directors of the school and we are sure that all the children are either safe at home, in the hospital or unfortunately died," Angel Sarmiento, a top officer in the Mexican marines, told journalists at the ruins of the Enrique Rebsamen school on the capital's south side.

"There are indications there may be an (adult) still alive in the rubble. There are traces of blood... as if the person had dragged him or herself and may still be alive."

The story had made headlines around the world, injecting a ray of hope into a tragedy that killed 19 children and six adults at the school.

Relatives and neighbors laid white wreaths near the flattened school Thursday in memory of the dead, hugging each other in tears.

"Sad, painful. In these moments, you can't put into words what you're feeling after the loss of a loved one," said Miguel Angel Ortiz, whose niece was killed.

But real stories of hope continued to emerge from the ruins.

In the north of the city, a man who had been trapped for 26 hours and a 90-year-old woman were pulled alive from the rubble.

Rescue teams have flown in from the US, Israel, Japan, Spain and numerous Latin American countries.

Tuesday's tragedy struck just two hours after Mexico held a national earthquake drill -- as it does every year on the anniversary of the 1985 quake.

General » Be a reporter: Write and send your article » Subscribe for news alert
Tags: Mexico, quake