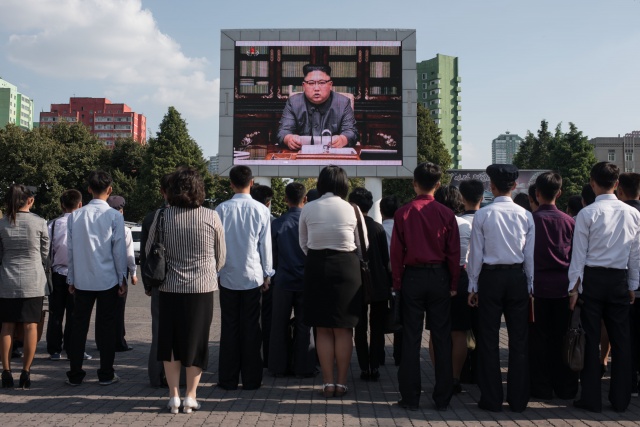 Spectators listen to a television news broadcast of a statement by North Korean leader Kim Jong-Un, before a public television screen outside the central railway station in Pyongyang on September 22, 2017. US President Donald Trump is "mentally deranged" and will "pay dearly" for his threat to destroy North Korea, Kim Jong-Un said on September 22, as his foreign minister hinted the regime may explode a hydrogen bomb over the Pacific Ocean. (Ed JONES / AFP)

(AFP) - China warned on Friday that the situation on the Korean Peninsula was "complicated and sensitive" and called for restraint on all sides after North Korea hinted that it might explode a hydrogen bomb over the Pacific Ocean.

Beijing's appeal came as a war of words between Donald Trump and Kim Jong-Un escalated, with the young North Korean leader calling the 71-year-old American president a "mentally deranged US dotard".

On the sidelines of the UN General Assembly in New York, North Korean Foreign Minister Ri Yong-ho told reporters Pyongyang might now consider detonating a hydrogen bomb outside its territory.

"All relevant parties should exercise restraint instead of provoking each other," he said.

China has repeatedly called for peace talks, suggesting that Pyongyang halt its nuclear activities in return for the United States suspending military drills in the region.

When asked about Trump's statement Thursday that Chinese banks are curbing trade with North Korea, Lu responded: "As far as I know, the circumstances you described are not consistent with fact."

"As a matter of principle," he continued, "China has always been committed to implementing UN Security Council resolutions and fulfilling our international obligations."

Employees at Chinese bank branches in Beijing and the border city of Yanji -- a major trade and transportation hub between China and North Korea -- told AFP last week that they have suspended financial transactions for North Koreans.

General » Be a reporter: Write and send your article » Subscribe for news alert
Tags: NKorea, nuclear, US, UN, China