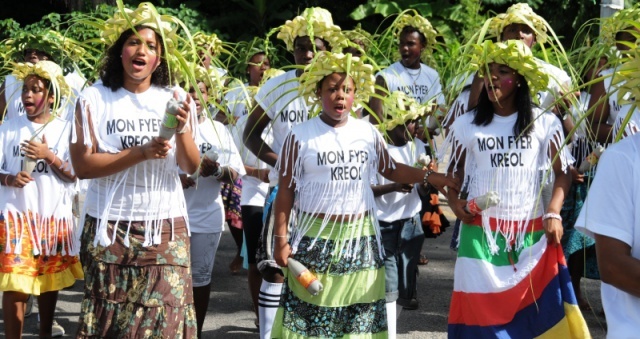 A variety of activities will take place in October to revive the Seychelles’ rich and diverse culture which makes these islands a melting pot of cultures. (Seychelles News Agency)

(Seychelles News Agency) - A Creole village and a literature contest are two new activities on the programme for the Seychelles' annual Creole Festival starting Sunday.

Unlike previous years, the Creole Festival 2017 will take place throughout the month of October.

Through the signing of a new agreement with the owner of Beachcomber Ste. Anne resort, the organising committee will be using the former Reef Hotel in the eastern district of Anse Aux Pins to set up a Creole village.

“We will turn the area into another Creole village where all foreign participants participating in the festival will also be accommodated,” explained Gaelen Bresson, member of the organising committee.

The former Reef Hotel will also host several activities such as the kamtole (traditional dance) competition and will feature for the first time the participation of dancers from workplaces. The bal assosye (traditional ball) and bon vye tan (evening reminiscence of the good old times), as well as the Fon Lanmal fashion show highlighting the creativity of local as well as regional fashion designers, will also take place at the venue.

Another new event is the Creole literature competition in honour of the late Regina Melanie, a pillar of the Creole language organised by the International Creole Institute in Seychelles celebrating its 30th anniversary.

The much-awaited annual festival which starts on October 1st with formal activities as from the 20th is a celebration of the Islanders’ Creole life through music, food, dance, theatre, fashion, literature and not forgetting traditional practices.

This year’s edition promises locals and visitors a variety of activities to revive the Seychelles’ rich and diverse culture which makes these islands a melting pot of cultures.

Regular activities of the festival will still be on the programme albeit some at new locations.

“This year, for example, we are having the popular beach activity ‘dimans kreol borlanmer’ (a Creole Sunday at the beach) at Beau Vallon instead of Anse Royale where it was traditionally held,” said Bresson.

He added that after years of having it at Au Cap and Anse Royale in the southeast of the main island, the committee wanted a change and will move the event to the north at Beau Vallon.

The chief executive of the International Creole institute said also on the programme is a workshop with the members of the National Assembly.

Flora Ben-David said, “We are mandated to promote our mother tongue, so as part of our work plan we have decided to start with the national assembly because they are already using the language in their work on a daily basis. Furthermore as leaders they will assist us with the preservation of Creole language.”

For theatre lovers, a well-loved local production “boulot feray” will have a follow-up version. The comic piece which re-lived how Seychelles traditional weddings took place in the past is back on the programme after over 20 years with a new twist as the couple are now getting divorced.

Other theatrical dramas by local instructor Kurt Lagrenade are also on the programme.

Students will be showcasing their creative talents in ‘en moman kreativite’ (a creative moment) which include singing, dancing, storytelling and dramas.

The elderly society also has the annual ‘Tifin’ on the programme which is an afternoon event where this yeara foreign couple gets to tie the knot the old fashioned way.

“We are liaising with hotels, the tourism board, Civil Status as well as agents to get a visiting couple for this traditional wedding. In most cases they only have to have their clothes and we do the rest. If now we provide the traditional attire,” said event organiser Jessie Freminot.

Throughout the month of October, Creole music will resonate in the capital Victoria with the sale of traditional food and drinks and locally made products including arts and crafts.

Activities will also take place on the other two main islands of Seychelles, an archipelago in the western Indian Ocean. Praslin and La Digue, the second and third most populated islands, will celebrate their Creole roots during the last weekend of October.