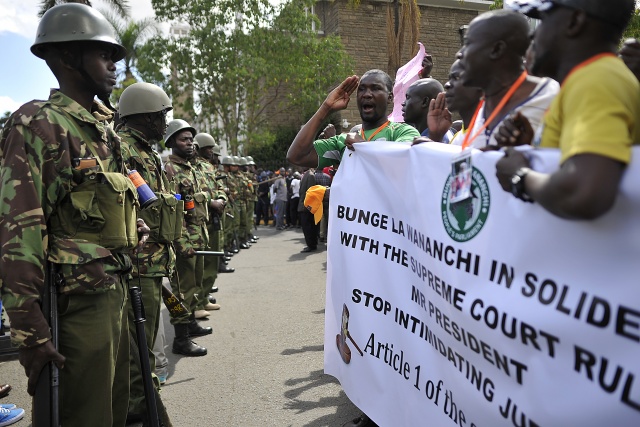 Police officers form a cordon at the gates of the Supreme court in Nairobi on September 20, 2017, as supporters of Kenya's main opposition National Super Alliance (NASA) presidential flag-bearer Raila Odinga gather during a reading out of the full ruling that annuled Kenya's August 8 election. Kenya's Supreme Court on September 20 blamed the election commission for last month's annulled presidential vote, rebuking officials for bungling the transmission of results and basing the outcome on dubious documents. (TONY KARUMBA / AFP)

(AFP) - Kenya's electoral commission on Thursday postponed a re-run of the presidential vote to October 26, giving itself nine extra days to fix problems that had caused the first poll to be annulled.

The decision came a day after the Supreme Court issued a detailed judgement lambasting the Independent Electoral and Boundaries Commission (IEBC) for failing to properly conduct the August election.

The IEBC had set the new election for October 17.

However, concerns have been mounting over whether the panel was able to conduct the necessary reforms in such a short time.

In a statement, the IEBC said it had decided to push back the vote as the full court ruling "impacts on the election operations and in particular (the) technology to be deployed."

"In order to ensure that the commission is fully prepared to deliver an election that meets the standards set out by the Supreme Court, we wish to notify the public and all stakeholders that the fresh presidential election shall now be held on Thursday 26 October," the IEBC said in a statement.

The Supreme Court declared President Uhuru Kenyatta's re-election "null and void" on September 1 after hearing a legal challenge filed by the opposition, led by Raila Odinga.

The ruling has prompted the biggest political crisis in the country since disputed poll in 2007, which led to violence that left more than 1,100 people died.

In its full judgement, the court outlined "disturbing, if not startling, revelations" about the conduct of the IEBC in its management of the election.

They included failing to ensure vote tallying forms were properly transmitted and announcing a result that could not be verified, due to a lack of the forms.

The IEBC was also hauled over the coals for failing to open up its computer servers, after the opposition alleged the system was hacked and rigged.

"If IEBC had nothing to hide it would have readily provided access to ICT (information and communications technology) logs and servers to disprove the petitioner's claim," said Deputy chief justice Philomena Mwilu.

Chief Justice David Maraga said the judgement "ought to lead IEBC to a soul-searching and to go back to the drawing board."

Kenyatta described the court ruling as a "monstrous injustice".

He was speaking at a press conference at the same time as the IEBC announced the new date, appearing unaware of the schedule change which would see the nation return to the polls on his 56th birthday.

Kenyatta said the court did not dispute the number of votes cast.

"Not only did the judgement rob the Kenyan people of their democratic right but it also has the potential to throw our country into judicial chaos," he said.

"The effects and precedent set in that singular judgement by a bench of the court says that a bench can nullify the decision of millions of Kenyans without due regard to evidence."

Earlier on Thursday Kenyatta accused the four judges who ruled in favour of overturning the election of staging "a judicial coup".

Since the judges annulled the presidential election Kenyatta and his supporters have launched a series of verbal attacks on the judiciary, with Kenyatta calling the judges "crooks" and threatening to "fix" the courts.

Kenyatta insisted a new election be held within the constitutionally allowed 60 days -- which expire on October 31. He said cabinet had approved the budget for fresh elections, expected to cost some 10 billion shillings ($96 million, 81 million euros).

His longtime rival Odinga has vowed that an election will not take place if his demands are not met, including the sacking of top election officials and new suppliers of election technology and materials.

French firm OT-Morpho which provided technology to biometrically identify voters and transmit results had said it would not be able to reset its systems by October 17.

Observers have warned of a "constitutional abyss" if the election does not take place within the required 60 days.