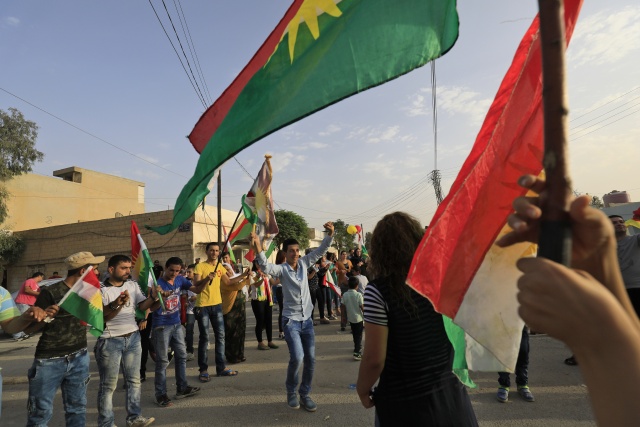 Syrian Kurds dance with the Kurdish flag as they celebrate in the northeastern Syrian city of Qamishli on September 25, 2017, in support of the independence referendum in Iraq's autonomous northern Kurdish region. Iraqi Kurds voted in an independence referendum, defying warnings from Baghdad and their neighbours in a historic step towards a national dream. (Delil souleiman / AFP)

(AFP) - Iraq's Kurds defied widespread opposition to vote Monday in a historic independence referendum, sparking fresh tensions with Baghdad and threats from Turkey while Washington warned it would "increase instability".

The vote in the autonomous Kurdish region of northern Iraq and some disputed areas is non-binding and will not lead automatically to independence, but is seen by the Kurds as a major step towards a long-cherished dream of statehood.

Voters flocked to the polls, eager to show off their ink-stained fingers after casting their ballots.

Turnout was 72 percent, with 3.3 million of the 4.58 million registered voters taking part, election commission spokesman Shirwan Zirar said late Monday. Prior to the vote, the commission had put the electorate at 5.3 million.

Results were expected within 24 hours, with an overwhelming "yes" vote not in doubt.

The vote took place peacefully and in a festive atmosphere, but signs of potential trouble mounted as the day progressed, with Washington saying it was "deeply disappointed" that the ballot went ahead.

"The United States' historic relationship with the people of the Iraqi Kurdistan Region will not change in light of today's non-binding referendum, but we believe this step will increase instability and hardships for the Kurdistan region and its people," State Department spokeswoman Heather Nauert said in a statement.

Expressing respect for "the sovereignty, territorial integrity and unity of Iraq", he called for differences to be resolved through "structured dialogue and constructive compromise".

Lawmakers in Baghdad, which has declared the vote unconstitutional, demanded the government send troops to disputed areas where the referendum was taking place.

In Istanbul, President Recep Tayyip Erdogan warned that Turkey -- which fears the effects of the vote on its own sizeable Kurdish population -- would shut its border with Iraqi Kurdistan and threatened to block key exports.

And in Kirkuk, a disputed city where the vote controversially went ahead, security forces deployed on the streets after a curfew was imposed in parts of the city.

"I came very early to be the first to vote for a Kurdish state," said Diyar Abubakr, 33.

"It's a day of celebration today. That's why I've put on our traditional outfit, which I bought for the occasion."

Veteran Iraqi Kurd leader Massud Barzani, who initiated the vote, smiled as he cast his ballot early in the morning, wearing a traditional headscarf.

He pushed ahead with the referendum despite the opposition from Baghdad and Ankara, but also from Iran which has its own large Kurdish minority, and Western countries who fear the vote could hamper the fight against the Islamic State (IS) jihadist group in which cooperation between Baghdad and the Kurds has been key.

Polling stations were scattered across the three northern provinces of autonomous Iraqi Kurdistan -- Arbil, Sulaimaniyah and Dohuk -- as well as in disputed border zones such as the oil-rich province of Kirkuk.

Asked about the risks of armed conflict, Abadi's spokesman Saad al-Hadithi told AFP: "If there are clashes in these zones, it will be the job of federal forces to apply the law."

Karim al-Nuri, a head of the Badr Brigade which forms part of the powerful Hashed al-Shaabi paramilitary units, suggested the Shiite group was ready to deploy to "Kirkuk and the disputed zones occupied by armed gangs, outlaws who do not respond to the army command."

Kirkuk, home to Arabs, Kurds and Turkmen, has been a particular point of concern and late Monday police said a curfew was being imposed in the city centre and in Arab and Turkmen areas "to ensure security, monitor the situation and protect the citizens of Kirkuk".

A senior official in Kirkuk later said the situation was stable and that the curfew would be lifted within hours. "Tomorrow will be a normal work day in Kirkuk," he said.

Abadi on Sunday pledged to take all the "necessary measures" to protect Iraq's unity, as his government urged all countries to deal only with it on oil transactions.

The Iraqi Kurds export an average 600,000 barrels per day through a pipeline running through Turkey to Ceyhan on the Mediterranean.

He also said Turkey's Habur border crossing with Iraqi Kurdistan would be closed.

Tehran has increased pressure, announcing Sunday it had blocked all flights to and from the region at Baghdad's request.

However, the referendum sparked celebrations in the Syrian Kurdish city of Qamishli, in solidarity with their brethren across the border.

"We've been waiting for this moment for more than 100 years, to celebrate the independence of Kurdistan," said one of the revellers, Rezkar Pigeot, 40, as young Kurds sang and danced in the streets.

Left without a state of their own when the borders of the Middle East were redrawn after World War I, the Kurds see themselves as the world's largest stateless people.

The non-Arab ethnic group number between 25 and 35 million people spread across Iraq, Iran, Turkey and Syria.