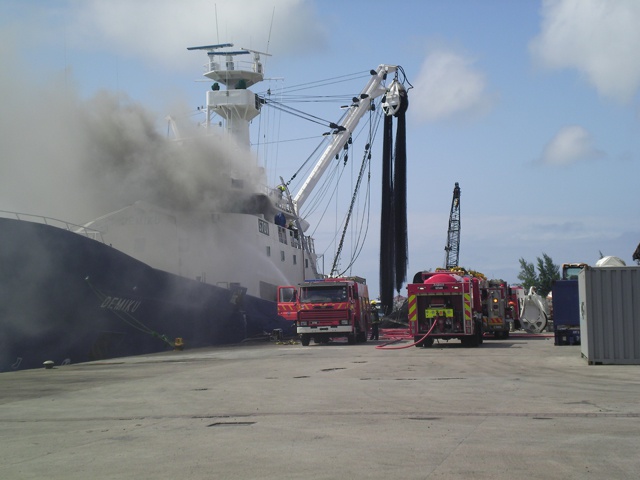 According to information SNA has received from vessel’s local shipping agent, Hunt Deltel and Co Ltd, ‘Demiku’ arrived in Port Victoria at 7.00am local time today to repair its damaged fishing nets before heading back out to sea.

The fire onboard the tuna fishing vessel was reported some two and a half hours later at around 9.40 am.

The Seychelles Fire and Rescue Services Agency (SFRSA) says it mobilized 33 firemen from its main station in the capital of Victoria with the help of 9 fire officers from the Airport Fire Services based at Pointe Larue, eastern district of the main Seychelles island of Mahé.

Water and foam were used in the operation.

“We worked closely with the Seychelles Maritime Safety Administration that was monitoring the operation to ensure that there was no risk of the boat capsizing because of too much water being sprayed to put out the fire.”

Though the fire has now been extinguished SFRSA says it will be sending a team to the port area every hour to monitor and ensure that the fire does not re-ignite.

An investigation is underway to determine how exactly the fire started and what caused it.

“We have started our investigation on information gathered so far and will proceed from there, we have been informed that the fire apparently started on the main deck and spread to the wheelhouse,” said Madeleine.

SNA has learnt that there were 32 sailors on board the boat and that one of them was transported to the hospital and have been admitted while the others have been moved to some hotels.

The Seychelles Hospital did not confirm how many people reported to the hospital.

The shipping agent has informed SNA that the owner of the vessel will be flying to the Indian Ocean archipelago tomorrow.

‘Demiku’ is expected to unload tomorrow the 350 tonnes of tuna onboard to the Seychelles’ only tuna canning factory, Indian Ocean Tuna, Ltd, which is one of the largest tuna canneries in the world, producing 1.5 million cans of tuna per day.

Port Victoria, the main port of the capital of the Seychelles islands, is one of the busiest tuna fishing ports in the world, where an average of 200,000 metric tonnes of fish are landed and transhipped every year.