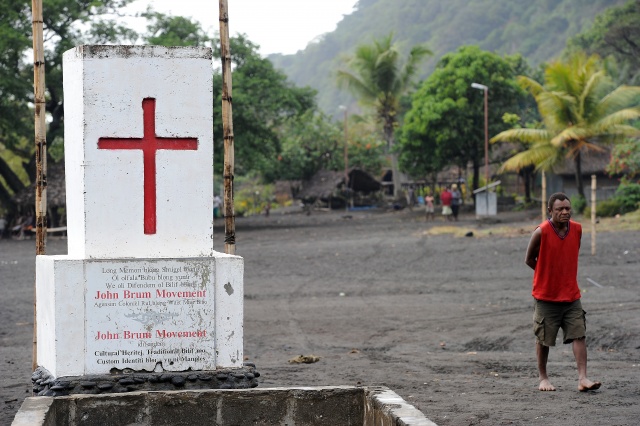 In a picture taken on August 7, 2010 the red cross of the local cargo cult dominates Sulphur Bay's town square below Mount Yasur volcano on Tanna in Vanuatu. One of the most accessible volcanos on Earth, the 361-metre (1,190-foot) Mount Yasur is also nearly always active -- its super-hot crater a warm glow seen from around the island. The volcano has also been known to cause a tsunami and locals live with the constant nuisance of falling ash destroying the crops they need for their survival on the island, where most still live in traditional villages. (AFP PHOTO / Torsten BLACKWOOD)

(AFP) - Vanuatu on Thursday ordered the compulsory evacuation of an entire island where a huge volcano rumbled to life over the weekend, threatening a major eruption.

All 11,000 people on the island of Ambae -- in the Pacific archipelago's north -- will be evacuated by October 6, Prime Minister Charlot Salwai's office said.

Vanuatu's National Disaster Management Office (NDMO) said it was the first time in living memory that an island's whole population had been moved because of volcanic activity.

"We have the shipping capacity here in Vanuatu to move 11,000 people, it will be mainly commercial vessels moving people to neighbouring islands," NDMO director Shadrack Welegtabit told AFP.

Most of Ambae's population is already sheltering in evacuation centres on the island after the Manaro Voui volcano rained rocks and ash on their villages.

It sent up a plume of steam and ash over the weekend, prompting authorities to declare a state of emergency and raise the volcano's threat level to four, the second highest rating.

"We have already moved people out of the high ground to safe areas in the west and the east (of Ambae island)," Welegtabit said.

"The likelihood is that it will go to level five... (so) we have to get people off the island."

The volcano, also known as Aoba and Lombenben, has three lakes in its crater and last erupted in late 2005.

On that occasion about 5,000 people were evacuated and it was three months before the volcano settled enough for them to return home.

Welegtabit said emergency officials were looking at using schools and other large buildings on neighbouring islands for temporary accommodation.

He said it was impossible to know how long the emergency would last.

"It's a question of how long the volcanic activity will continue, nobody knows," he said.

The eruption so far, while officially classed as "moderate", has led to warnings of flying rocks, acid rain and volcanic gas.

It has also laid a blanket of ash over crops and water sources in an area that was already experiencing a dry spell.

The Vanuatu government has appealed for international aid to help deal with the crisis.

General » Be a reporter: Write and send your article » Subscribe for news alert
Tags: Vanuatu, volcano