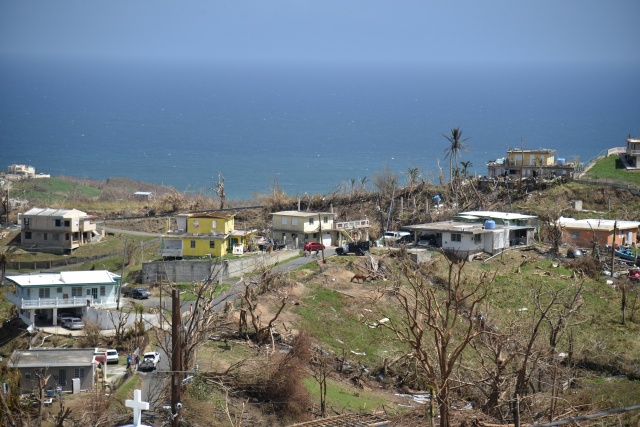 View of a damaged zone in Yabucoa, in the east of Puerto Rico, on September 28, 2017. The US island territory, working without electricity, is struggling to dig out and clean up from its disastrous brush with hurricane Maria, blamed for at least 33 deaths across the Caribbean.(HECTOR RETAMAL / AFP)

A week after the Category Four storm struck, the White House said Trump had made it easier for fuel and water supplies to arrive to the ravaged island of 3.4 million US citizens.

For 10 days, he has waived a 1920 law that restricts foreign-flagged ships from operating between US ports, in response to a request from Puerto Rico's governor.

Puerto Ricans have struggled to rebuild their lives over the past eight days in the aftermath of a storm that took down the power grid, crippled cell phone communications and wrecked water supplies.

Hours-long lines have been the norm at gas stations as people scramble to find fuel for generators and cars.

Much of the capital San Juan is a landscape of ruin: buildings with all their windows shattered, traffic lights down, and trees that survived now without a single leaf. Some stores are open but they do not have much to sell.

Around 10,000 people are in shelters, according to emergency responders at FEMA, the US disaster relief agency, and thousands more are clearing their homes of debris.

Shortages of food and water have added to the misery and uncertainty amid a frustratingly slow relief effort.

"The hurricane came and went but what it left is worse," said Sandra Londono, a 46-year-old homemaker waiting in line Thursday at a supermarket in San Juan. "We all know that aid is supposedly on its way, but it is not getting here."

Governor Ricardo Rossello signed a slew of orders Thursday aimed at helping the island get back on its feet, including one that calls for gasoline wholesalers to designate service stations specifically for people deemed as essential -- like hospital, banking and telecommunications employees -- so they can get to work more easily.

In a sign of the seriousness of the challenge, the US military on Thursday tapped three-star general Jeff Buchanan to lead its response.

Around 4,400 military personnel have been deployed to deal with the crisis.

This, after Republican Senator Marco Rubio complained "there is no clear command, control, and communication between local officials on the ground and federal agencies".

Asked why it took eight days to get a top general on the ground, Trump's homeland security advisor Tom Bossert defended the administration's response.

"It didn't require a three-star general eight days ago," he said, saying that much of the criticism was based on out of date information.

Critics say Washington is repeating the errors of Hurricane Katrina -- which ravaged New Orleans in 2005.

"We're replaying a scene from Katrina in deploying the Department of Defense in helping the people of Puerto Rico," Honore said in an interview with NPR.

Because of its distance from the mainland and the loss of the power grid Puerto Rico "is a bigger and tougher mission than Katrina", he said.

Praised for the federal response to hurricanes in Texas and Florida, Trump has been on the defensive over his handling of the crisis in Puerto Rico.

Accused of showing indifference to its plight as he feuded with NFL football players, he has since pledged a massive relief effort and will visit the hurricane-battered island on Tuesday.

"FEMA & First Responders are doing a GREAT job in Puerto Rico. Massive food & water delivered. Docks & electric grid dead. Locals trying really hard to help but many have lost their homes. Military is now on site and I will be there Tuesday. Wish press would treat fairly!," he wrote in two of them.

On Wednesday the US military swung into action, stepping up an air bridge to the island, and the USNS Comfort, a 1,000-bed hospital ship based in Virginia, is expected to depart Friday for Puerto Rico to shore up its storm-hit hospitals.

Meanwhile, bottlenecks have developed in the distribution of aid that has arrived in Puerto Rico.

Carmen Yulin Cruz, the San Juan Mayor, confirmed that 3,000 containers of supplies were stuck in the city's port because of disagreements over how the aid should be distributed.

Critics of the Jones Act say the lack of competition with foreign shippers makes any shipment from the US mainland to Puerto Rico 30 percent more expensive than it would be from a foreign port.

The Jones Act restrictions were lifted for Texas and Florida after they were hit by Hurricanes Harvey and Irma respectively, but had not been waived for Puerto Rico.

General » Be a reporter: Write and send your article » Subscribe for news alert
Tags: weather, Hurricane, Caribbean, US, PuertoRico