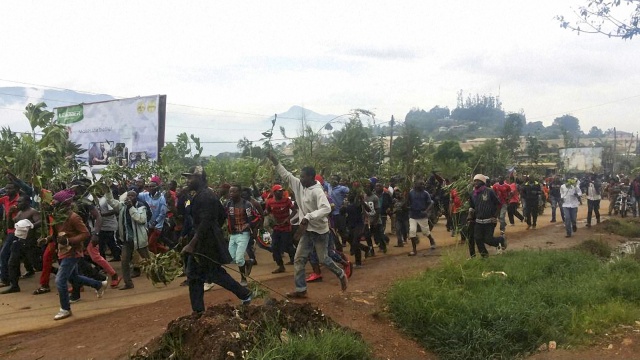 Authorities in an English-speaking region in southwestern Cameroon on Thursday announced temporary curbs on travel and public meetings, adding to a curfew imposed in the northwest after protests by the country's anglophone minority.

The steps were announced ahead of what is expected to be a symbolic declaration of independence by Cameroon's English speakers on Sunday.

A fifth of the 22 million people in the francophone-majority West African state is English-speaking -- a legacy of the unification in 1961 of two colonial-era entities previously run by France and Britain.

In a statement, the authorities in Southwest Region announced the closure of sea and land borders, the suspension of transport, a ban on travel between towns and on public meetings of more than four people.

In a second statement, the Southwest Region authorities said military reinforcements were expected, and called on the population to "stay calm".

The authorities in the Northwest Region previously announced a 10pm to 5am curfew after thousands of people demonstrated in English-speaking areas on September 22 in defiance of a government ban.

English-speakers in Cameroon have long complained that the country's wealth from commodities has not been shared out fairly and that they suffer discrimination.

Special grievances are reserved for education and the judicial system, where anglophones say the French language and legal system are imposed on them.

Several schools have been torched in Bamenda, the major hub of the Northwest Region, since the start of the school year in early September.

Most campaigners want the country to resume a federalist system -- an approach that followed independence in 1960 but was later scrapped -- but a hardline minority is calling for secession. Both measures are opposed by the country's long-term president, 84-year-old Paul Biya.

On social media, some campaigners have been calling for October 1 to be symbolically named independence day.

In a statement issued in New York on Thursday, the UN said Secretary General Antonio Guterres was "deeply concerned" about the situation in Cameroon.

"He urges the authorities to promote measures of national reconciliation aimed at finding a durable solution to the crisis, including by addressing its root causes," the statement said.