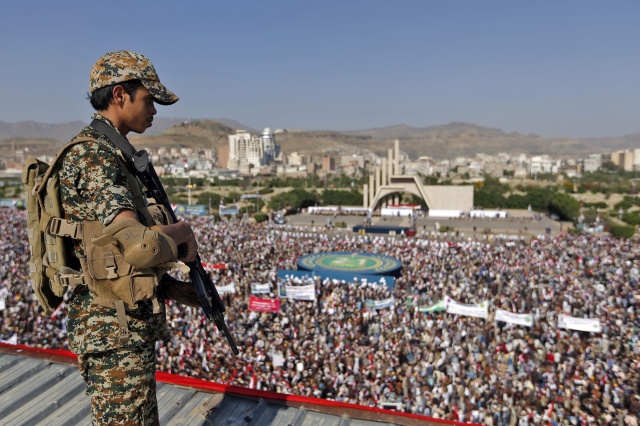 Tens of thousands of supporters of Yemen's Iran-backed Huthi rebel movement gather in the capital Sanaa on September 21, 2017 to mark the third anniversary of the rebel takeover. Huthi rebels captured Sanaa on September 21, 2014, seizing the government headquarters and military sites with the aid of forces loyal to ex-president Saleh -- a former foe. (MOHAMMED HUWAIS / AFP)

(AFP) - The UN Human Rights Council agreed Friday to send war crimes investigators to Yemen, overcoming resistance from Saudi Arabia, which had fought to head off an independent international probe.

In a resolution adopted by consensus, the council mandated UN rights chief Zeid Ra'ad Al Hussein to send a group of "eminent experts" to Yemen, where a Saudi-led coalition has been bombing Huthi rebels since March 2015.

The experts will conduct "a comprehensive examination of all alleged violations and abuses of international human rights" committed in the conflict and seek "to identify those responsible," it said.

Launching the probe marks a victory for a group of European states and Canada, which pushed hard for an international inquiry fully independent of a Yemeni national investigation that is backed by the Saudis.

The Saudi-led coalition has been accused of bombing schools, markets, hospitals and other civilian targets in support of Yemeni President Abedrabbo Mansour Hadi.

The Iran-backed Huthi rebels have also been accused of widespread abuses, which the UN team will also probe.

Saudi Arabia had for the past two years succeeded in blocking the rights chief's call for an international inquiry.

In a letter leaked to several media outlets this week, the kingdom threated economic and diplomatic retaliation against rights council members which voted for the EU/Canadian proposal.

The Saudi envoy to the council, Abdulaziz Alwasil, ended up endorsing Friday's resolution, which was slightly softer than previous EU proposals.

An earlier Dutch/Canadian draft asked for a Commission of Inquiry, the UN's highest level investigation, but that call was removed from the adopted version.

In a statement, the Saudi Press Agency hailed the move as a victory for Riyadh's diplomatic efforts to have the Dutch proposal withdrawn and for Europe to adopt "the Arab proposal which supports Yemen's national investigative committee".

Countries with significant and lucrative ties to Saudi Arabia, including the United States, Britain and France, were reported to have sought a compromise to break the deadlock.

US envoy Theodore Allegra said he was pleased the 47-member rights council was "speaking with one voice on Yemen" and Britain's ambassador Julian Braithwaite called the resolution "a significant achievement".

Human Rights Watch had argued forcefully for a Commission of Inquiry but said Friday's result still amounted to a success.

"After more than two years of impunity for horrendous crimes in Yemen, today could mark a turning point," HRW's Geneva director John Fisher said in a statement.

The new probe "will bring an unprecedented level of scrutiny to the conduct of all parties to the Yemen war", he said.

Amnesty International called the resolution "a momentous breakthrough that will pave the way for justice for countless victims of human rights abuses and grave violations of international law, including war crimes."

The situation in Yemen is one of the world's worst humanitarian crises.

More than 8,500 people have been killed and nearly 49,000 wounded in the conflict, World Health Organization (WHO) figures show.

At least 17 million people there are facing dire food shortages.

Another 2,100 people have died in a cholera epidemic which erupted in in April. The International Committee of the Red Cross (ICRC) warned Friday there could be as many as 900,000 cases by year's end.