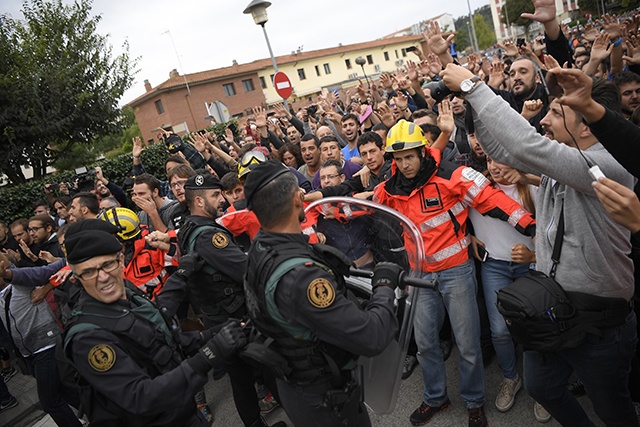 Firemen hold a group of people in front of Spanish Guardia Civil officers outside a polling station in San Julia de Ramis, on October 1, 2017, on the day of a referendum on independence for Catalonia banned by Madrid. LLUIS GENE / AFP

(AFP) - Police seized ballot boxes and ballot papers on Sunday that were to be used in an independence referendum in Catalonia deemed illegal by Madrid, Spain's interior ministry said.

"These are the first ballot boxes and ballots seized by police in Barcelona. Officers are continuing their deployment in Catalonia," Spain's interior ministry said in a Twitter message that included a picture of four plastic ballot boxes and piles of ballots.

Officers from Spain's national police and Guardia Civil force were following a judge's orders to remove "material for the illegal referendum", the ministry added on Twitter at around 9:00 am (0700 GMT) when polling stations were due to open.

A court on Wednesday ordered police to prevent the use of public buildings "for the preparation and organisation" of the referendum.

Madrid argues the vote is illegal as the courts have ruled it unconstitutional.

But Catalan president Carles Puigdemont and his team insist Catalonia has a democratic right to decide on its future.