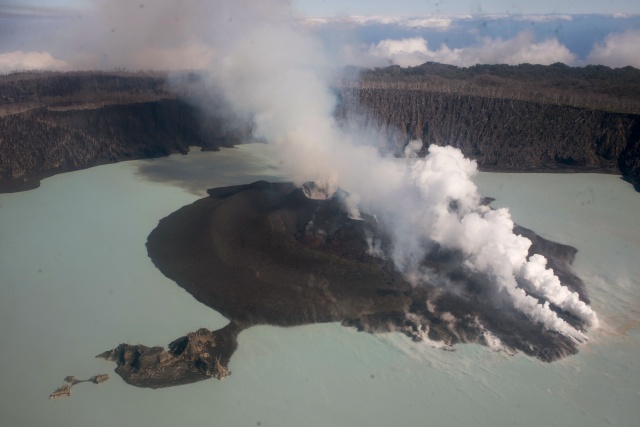 This photo taken on September 30, 2017 shows the Manaro Voui volcano on Vanuatu's Ambae island, where the volcano is threatening a major eruption. The Vanuatu government announced last week that all 11,000 residents on Ambae -- in the north of the Pacific archipelago -- would be moved, after the Manaro Voui volcano rumbled to life and rained rock and ash on villages. (Dan McGarry / VANUATU DAILY POST / AFP)

(AFP) - A Vanuatu volcano that sparked the evacuation of an entire island appeared to be stabilising, scientists said Tuesday, although aid workers said it was too early for villagers to return home.

All 11,000 people who live on Ambae, in the north of the Pacific archipelago, were ordered to leave after the Manaro Voui volcano rumbled to life and rained rock and ash on villages last week.

Fearing a major eruption, officials mobilised a rag-tag armada of civilian vessels to ferry residents to safety on other islands in what has been described as a "Dunkirk" style operation.

Vanuatu's official Geohazards Observatory said the threat had eased, although it maintained the volcano's status as level four, the second-highest rating.

It said the most recent observations from flyovers and seismic stations indicated the seismic activity was now limited to a lake in the volcano's crater.

"As the activity is now more settled and focused only on the new island in Lake Voui, the possibility of a large eruption affecting the whole island is now looking less likely," it said.

Red Cross spokesman Joe Cropp said the report of reduced seismic activity was "reassuring" but there were still thousands of people in emergency accommodation.

Locals can only return to Ambae when the government downgrades the threat to level three, which could take months, he said.

"We're still holding with the original plan of providing support to people for the next two weeks, then looking forward to the indefinite future," Cropp told AFP from the capital Port Vila.

"We have to plan ahead and be prepared... because we're not quite sure which way the volcano is going."

He said most of Ambae's population had now been relocated to three neighbouring islands, where they were sheltering in schools, churches and sporting grounds.

The evacuation succeeded in removing Ambae's population more than two days before the government target of Friday, Cropp added.

"I think the largest could take about 1,000 people and I also saw small water-taxi speedboats taking 20-30 people.

"For a really complicated evacuation of 11,000 people from a remote island it was quite impressive."

It comes as international relief efforts stepped up with the arrival of two Hercules aircraft carrying supplies, one from Australia and the other from New Zealand.

An Australian navy vessel with emergency specialists and food supplies is expected to arrive on Wednesday.