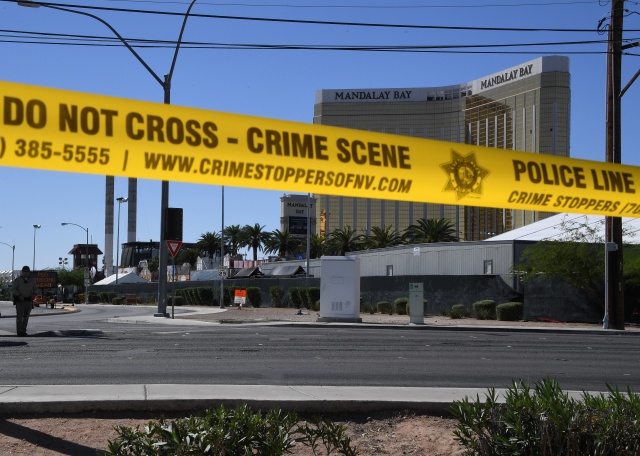 The damaged windows on the 32nd floor room that was used by the shooter in the Mandalay Hotel and the Route 91 festival venue (front) after a gunman killed more than 58 people and wounded more than 500 others when he opened fire on a country music festival in Las Vegas, Nevada on October 2, 2017. Police said the gunman, a 64-year-old local resident named as Stephen Paddock, had been killed after a SWAT team responded to reports of multiple gunfire from the 32nd floor of the Mandalay Bay, a hotel-casino next to the concert venue. (Mark RALSTON / AFP)

(AFP) - Investigators worked feverishly Tuesday to find out why a retired accountant gunned down at least 59 people and wounded over 500 others at an open-air concert in Las Vegas, raking the crowd with bullets from a 32nd-floor hotel room packed with weapons.

As America grappled with the deadliest mass shooting in its history, officials reacted cautiously to an Islamic State group claim that Stephen Craig Paddock, 64, had carried out Sunday night's massacre on behalf of the jihadist group.

Police said Paddock, who had no criminal record, smashed windows in his hotel room shortly after 10:00 pm on Sunday and trained bursts of automatic weapons fire on thousands of people attending a country music concert down below.

In footage of the massacre broadcast on CNN, the sustained rattle of gunfire is heard as people scream and bolt for cover with little idea of where the shots were coming from.

"We saw bodies down. We didn't know if they had fallen or had been shot," said Ralph Rodriguez, an IT consultant from Pomona Valley near Los Angeles, who was at the concert with a group of friends.

"People started grabbing their loved-ones and just strangers, and trying to help them get out of the way," he said.

In a statement on online, IS claimed Paddock was one of its "soldiers" but the FBI said it had found no such connection so far with the local sheriff describing him as a lone "psychopath."

Sheriff Joseph Lombardo said Paddock fired through the door of his hotel room and hit a security guard in the leg.

But when a SWAT team stormed the room where Paddock had been staying since September 28, they found he had killed himself.

Inside the room were 23 firearms including automatic weapons, he said.

Investigators also found another 19 firearms along with explosives and several thousand rounds of ammo at Paddock's house in Mesquite, Nevada, some 80 miles (130 kilometers) away.

Lombardo said they had discovered several pounds of an explosive called tannerite at the house as well as ammonium nitrate, a type of fertilizer, in his car.

He said the death toll had risen to 59, with another 527 people wounded.

But the gunman's motive remains unclear.

"We're hunting down and tracing every single clue that we can get on his background," the sheriff said at a late-night briefing.

So far, investigators had found no manifesto or anything else to explain Paddock's actions, he said.

"This individual is a lone wolf and I don't know how it could have been prevented," he said earlier.

"I can't get into the mind of a psychopath at this point."

As the investigation continued, details started to emerge in the media about some of the victims -- a kindergarten teacher from California who married her childhood sweetheart; a Tennessee nurse; a high school secretary from New Mexico and a cheerleader, also from California.

On Monday night, there were vigils of solidarity with the dead and the wounded.

The Empire State Building went dark, as did the Eiffel Tower -- and much of the Las Vegas strip itself.

President Donald Trump denounced what he called "an act of pure evil" and said he would visit Las Vegas on Wednesday.

But the White House pushed back at calls to reopen the US debate on tighter gun controls.

"A motive is yet to be determined and it would be premature for us to discuss policy when we don't fully know all of the facts or what took place last night," Trump's spokeswoman Sarah Sanders said.

Lombardo said Paddock had apparently used some kind of hammer to smash the window of his hotel room before opening fire on the crowd of some 22,000 people.

IS, which provided no evidence for its claims, described him as a "soldier of the caliphate" saying he converted to Islam several months ago and went by the name Abu Abdel Bar al-Amriki -- "The American."

But the Federal Bureau of Investigation said it had found no such link so far. "We have determined to this point no connection with an international terrorist group," FBI special agent Aaron Rouse said.

CIA spokesman Jonathan Liu said the intelligence community was aware of the claim but advised "caution on jumping to conclusions before the facts are in."

According to his brother, Paddock was a high-stakes gambler and their bank-robber father was once on the FBI's 10 Most Wanted list.

But Eric Paddock said his brother had led an otherwise normal life, doting on their mother.

"He liked to play video poker. He went on cruises. He sent his mother cookies," he said.

"We're trying to understand what happened," his brother said.

Paddock had "no religious affiliation, no political affiliation" and was "not an avid gun guy at all," his brother added.

Witnesses said Paddock opened fire with an initial long burst of gunfire, and appeared to reload as he continued his spree.

Robert Hayes, a Los Angeles firefighter who was at the concert, said he first thought the noise was some kind of equipment malfunction.

But once he realized what was going on, he joined the first responders.

"It was pretty much like a war scene inside," Hayes said, as emergency crews used tables and metal guard railings as makeshift stretchers.

The Las Vegas attack is the deadliest shooting in modern US history, exceeding the toll of 49 dead in an attack on a Florida nightclub in June 2016.

It was also the latest in a series of deadly attacks at concert venues.

Twenty-two people were killed after an Ariana Grande concert in Manchester, England in May when a suicide bomber detonated a nail bomb in the foyer.

And 90 people were killed in November 2015 at the Bataclan theater in Paris during a concert by US band the Eagles of Death Metal.

General » Be a reporter: Write and send your article » Subscribe for news alert
Tags: US, crime, shooting