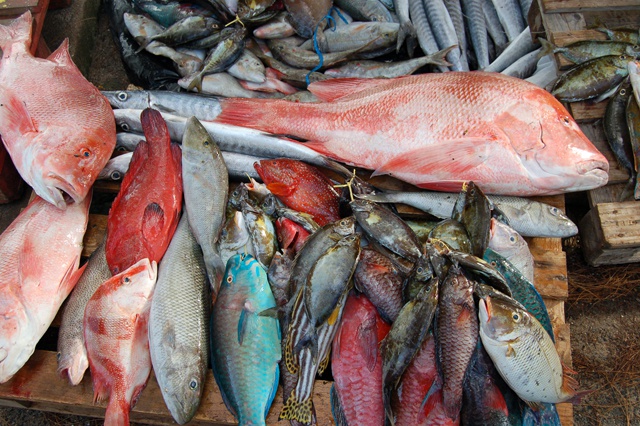 The prized 'Bourzwa' (red snapper) and other fish at the Victoria market (Gerard Larose, Seychelles Tourism Board)

(Seychelles News Agency) - With fish being one of the main source of nutrition for the Seychelles population of around 90, 000 people, consumers are finding it harder to obtain their main protein source, with prices having significantly increased over the past year.

Fish scarcity linked to rough seas which characterize the present south-east monsoon and will last until September, is worsening an already tough situation.

But even before the onset of the bad season, outlets were offering fishermen between 30 and 40 percent more for most fish in a bid to boost their stock and meet demand.

But the price of pelagics, such as trevally (karang) has also risen significantly.

"Fishermen were not bringing enough, claiming that prices were too low and going after sea-cucumber instead," the Chief Executive of ISPC Seychelles, the main wholesale company for hotels and restaurants, Alfred Fourcroy, told SNA.

He added that presently fish supply is still far short of demand.

"We had to do something to entice younger Seychellois back to the fishing boats."

Paul Morin, Chairman of the Seychelles Sea Cucumber Association, who intends to go into long line fishing, said that fish prices were bound to go up, with steady rise in operational costs, notably fuel, ice and food.

He told SNA that while registered fishermen benefit from concessions on fuel, they are now paying five times more than 15 years ago.

He added that while market supply of fish had decreased, there is increased demand from the hotels.

"Middlemen buy from fishermen to sell to hotels"

He notes that the Mahé plateau is not very big and most demersals are slow-growing, taking an average seven years to reach adulthood.

Morin said that unless there is control on export of certain species, residents will have no choice but to change their eating habits and consume more pelagic fish, such as tuna or bonito.

He noted that several Seychellois entrepreneurs are investing in long-liners, average 20 metres in length, to target big eye tuna, sailfish and other pelagics, for which there is increased demand, both locally and abroad.

Some 15 long liners are presently being built and will as from early next year be taking the fish that used to be caught by foreign fleets.

The Chief Executive of the Seychelles Fishing Authority (SFA) Finley Racombo said the situation is delicate.

“We have to ensure there is a steady fish supply to meet local demand, while facilitating the work of our fishermen."

He admitted that there has been a decrease in catch of some demersal species, such as Red Snapper while demand from the tourism sector has increased.

Another factor that has contributed to the drop in the demersal catch is piracy, which during the past three years meant that fishermen could not fish the plateau, north of Mahé, which is a rich fishing ground.

It remains to be seen, whether fish stocks have increased in that area now that a ban on fishing has been lifted with the easing of piracy in our waters.

Though it appears that fishermen will have to wait for the south-east monsoon to abate before returning to those waters.

Racombo said SFA is working on a Fisheries Management Plan for submission to Government, which include mariculture, which will allow some fish stocks to recover.

He told SNA that legislation now makes it compulsory for foreign purse seiners to land their by-catch in Seychelles. That means bonito, dorado and shark, since they are already required to release protected species such as turtle and dolphin.

"Such by-catch can be processed locally and yield value-added products," he said.

“These include fillet burgers, fish pate, fish soup and seafood sauce,” he said.

Meanwhile, Racombo also said he is satisfied to note that demersal fishermen in such areas as Roche Caiman on the outskirts of the islands’ capital of Victoria, Belombre northern district of the main Seychelles island of Mahé and Praslin, second most populated island of the archipelago have constituted associations and are open to discussions with SFA.

"That means that together we can adopt measures, such as avoiding to fish certain species during the laying season, to avoid stock depletion.”

With regards to proposition to control export of certain species, to the benefit of the local residents Racombo emphasized that this would go against Seychelles efforts to become a member of the World Trade Organization WTO, which favours free trade.

No surprise that fishing is one of the main activities among the islanders, fishing is in fact the second pillar of the economy after tourism.