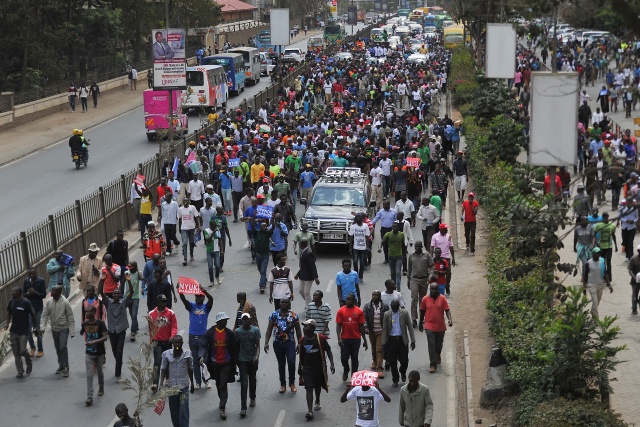 Supporters of Kenya's main opposition coalition, the National Super Alliance (NASA) demonstrate to call for the resignation of the Independent Electoral and Boundaries Commission (IEBC) officials over claims of bungling the August presidential vote, which was nullified by the Supreme Court, in Nairobi, on October 9, 2017. Opposition leader Raila Odinga, has called for protests this week, reiterated that he would not take part in a re-run of the presidential election on October 26, 2017 if his demands are not met, as Kenya's Supreme Court last month overturned the August election of President Uhuru Kenyatta citing "irregularities" in the counting of results. (TONY KARUMBA / AFP)

(AFP) - Kenyan opposition leader Raila Odinga withdrew Tuesday from a re-run of the presidential election in the latest twist to a political saga that has plunged the nation into uncertainty.

Odinga, 72, said he was pulling out because Kenya's election panel had failed to make vital reforms -- but he indicated this did not mean his battle was over.

He cited legal arguments which his party believes will compel election officials to begin the whole process from scratch.

The Supreme Court stunned the nation last month when it annulled the August 8 election victory by President Uhuru Kenyatta, citing what it called widespread irregularities in the counting process.

Since then Odinga and his National Super Alliance (NASA) have vowed not to take part in the re-run unless far-reaching changes are made to the Independent Electoral and Boundaries Commission (IEBC).

"We have come to the conclusion that there is no intention on the part of the IEBC to undertake any changes to its operations and personnel... All indications are that the election scheduled for 26 October will be worse than the previous one," said Odinga.

"After deliberating on our position in respect of the upcoming election... we believe that all will be best served by (the party) vacating its presidential candidature in the election."

Odinga said he was not giving up entirely, but that his move was the only way to ensure a free and fair election.

Leaning on a 2013 ruling by the Supreme Court, the opposition said that if a candidate withdraws, then the IEBC is required to conduct fresh nominations for the presidency.

"It is clear that this provision gives adequate time to undertake the reforms necessary to conduct an election that is in strict conformity with the Constitution," NASA said in a statement.

The legal validity of this argument is likely to be subject to heated debate.

Kenyatta said he was not deterred by Odinga's decision.

"We are ready to vote… we are ready for elections... it is democratic his right to participate or not," he said.

Odinga's announcement comes as the ruling party dominated parliament pushed forward Tuesday with plans to change electoral laws to reduce "ambiguities" that led to the poll being cancelled.

However the opposition sees the laws as a bid to legalise the "irregularities and illegalities" in the counting process cited by the Supreme Court.

While Kenyans voted peacefully on August 8, the opposition quickly cried foul over tallying and the Supreme Court agreed, citing "disturbing, if not startling, revelations" about the conduct of the IEBC.

These included failing to ensure tally forms were properly transmitted and announcing a presidential result that could not be verified, due to original forms being missing.

The IEBC was also hauled over the coals for failing to open up its computer servers, after the opposition alleged the system was hacked and rigged.

While the beleaguered IEBC has said it has tried to reform its procedures, this has not been enough to placate the opposition, which demanded the firing of top officials and the contracting of new companies to print tallying forms and run the vote counting technology.

The election has plunged Kenya into its worst political crisis since a disputed poll in 2007, which led to violence that left more than 1,100 people died.

However while violence immediately after the August election left 37 people dead -- mostly at the hands of police -- according to a Kenyan rights group, protests have since remained largely peaceful.

The uncertainty has also hamstrung east Africa's largest economy, leading to a slowdown in business across the private sector.