With sea waters calm, mackerel is in abundance in Seychelles' markets 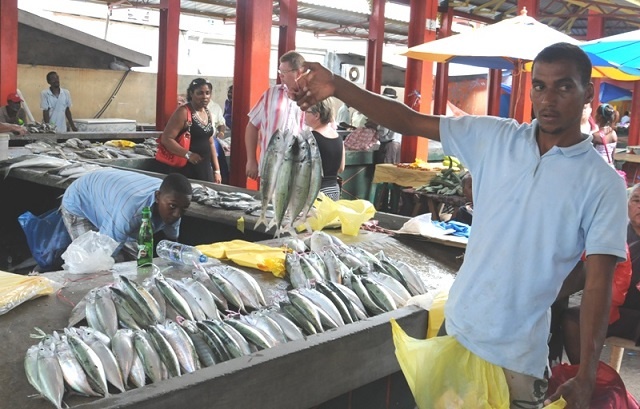 In Seychelles, mackerels can be bought mainly at the main market in the capital Victoria and other markets spread over Mahe. (Seychelles Nation)

(Seychelles News Agency) - With the waters of Seychelles much calmer than normal this time of the year, fish lovers have been able to benefit from a large supply of mackerel at a lower price than usual.

A local fisherman, Vivian Azemia, said the mackerel are not coming in sooner than normal, but that the sea is calmer than normal.

"Normally during this time of the year, the sea is still rough, but for some time now it’s been calmer making it easier to catch the mackerels,” Azemia said.

Mackerels are seen as the cheapest fish to buy in the island nation with a packet costing around $1.50 (SCR20) at the market. If you can get a packet straight at the beaches where they are netted, then you get them still fresh just like the Seychellois like to eat.

Azemia said that due to the larger yields, the prices have reduced so that the mackerels are selling faster.

This means great benefits for the 93,000 islanders in Seychelles, for whom fish is the primary source of protein in their diets. Fish is consumed daily in many homes and eating mackerels brings added benefits as the species is richer in fatty acids than others. In the local Creole cuisine, they are mainly eaten grilled, fried and poached among others.

A local consumer, Philomena Barbe, said, “I am making sure that I build up my stock because it’s not all the time that prices are as good as they are now.”

For local consumers buying mackerels depend largely on the prices as islanders very often will not spend more than $1.50 on a packet believing that it should be the cheapest ones at the market.

What is not considered is the richness of nutrients found in the species.  Mackerels are rich in vitamin D, vitamin B, proteins, selenium, and omega three fatty acids that can aid in the prevention of numerous illnesses such as age-related loss of vision, cancer, dementia and cardiovascular diseases.

In Seychelles, an archipelago in the western Indian Ocean, mackerels can be bought at the main market in the centre of Victoria, the capital and other markets spread over Mahe, the main island.

How long will the abundance of mackerels last? The chief fisheries advisor at the Seychelles Fishing Authority, Vincent Lucas, said that the early coming of Mackerels doesn’t necessarily mean that the season will prolong. Lucas is also advising fishermen to fish according to the market demand.

“Because Mackerel is a fish high in fat, it tends to rot easily so we advise them to fish wisely and avoid situations whereby they have to throw away their extras because they could not finish selling them,” Lucas told SNA.

A taste of the islands opens on the UK coast: Seychelles Gastronomy