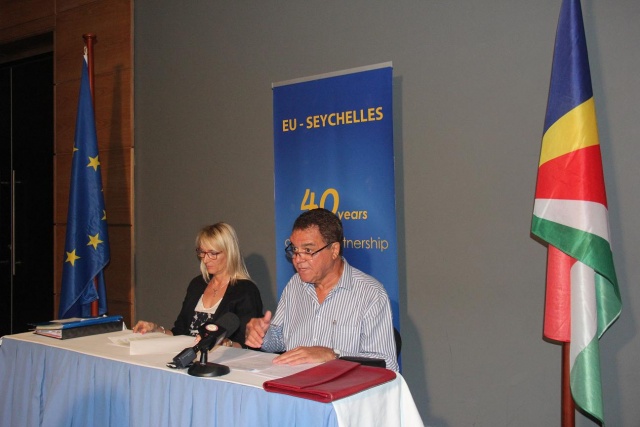 The Fifth Political Dialogue’ between Seychelles and the EU took place at the Eden Bleu. (Patrick Joubert, Seychelles News Agency)

(Seychelles News Agency) - Maritime security, the Blue Economy, climate change mitigation and regional economic integration are some of the areas where the European Union (EU) and Seychelles could work closely together, the EU ambassador to Seychelles said Tuesday.

Marjaana Sall made the statement in her opening address at the ‘Fifth Political Dialogue’ between Seychelles and the EU at the Eden Bleu on the eastern coast of the main island Mahe.

Among the topics discussed were the political and economic situation in Seychelles and Europe, respective priorities internally and externally, and various areas of partnership between the EU and Seychelles.

The two parties exchanged views on the political situation, governance, the rule of law and human rights in Seychelles. The EU has reaffirmed support in the field of governance in particular elections, the fight against corruption, gender equality and combating gender-based violence.

Sall said that: “Seychelles has fallen under a good political system and cohabitation is providing the perfect tone for dialogue and action.”

Seychelles is in cohabitation after the results of the National Assembly elections last September. The legislative body is controlled by the opposition coalition party, Linyon Demokratik Seselwa (LDS), while the executive body is from the president’s Party 'Lepep.

The Seychelles Foreign Secretary, Claude Morel, said the relationship between the EU-Seychelles its foundations built on common principles.

“The dialogue is a way to fortify these foundations by providing a platform for an in-depth exchange of views on political matters and global issues of mutual interest, thus, exploring ways to address common challenges,” said Morel.

Also discussed were ways to improve trade and commerce between Seychelles and the EU countries.

Morel said the EU is Seychelles’ top trading partner. Seychelles, an archipelago in the western Indian Ocean, exports $338 million worth of goods to Europe yearly, representing 60.9 percent of the island nation’s total exports.

Since EU is also Seychelles’s largest source of tourist arrivals with the sector being the top economic contributor, Morel, said that it is an important area where the more support from EU has been discussed.

The two parties reiterated their commitment to the improved ocean governance and full implementation of their Fisheries Partnership Agreement, in particular through the fight against illegal, unreported and unregulated fishing.

The EU Ambassador commended Seychelles for its active role played as the chair of the contact group on piracy off the coast of Somalia.

“We have reaffirmed our strong involvement against maritime crime in the Indian Ocean. Piracy, drugs and arms smuggling, human trafficking, illegal fishing and maritime pollution are serious issues which can undermine peace and ease of doing business,” said Sall.

While Seychelles has a high-income status, tackling inequalities and improving the lives of the poorest Seychellois remain key priorities, alongside measures to address the drugs issue. The EU said it will continue its support and offered further opportunities for working together with the Government in those areas.

Sall has given reassurances that the EU will still grant loans for small projects such as in the environment.

With a grant of $2.6 million, the EU financed a new solid waste landfill at Providence in order to provide the island nation with a sustainable means to deal with disposal.  Seychelles has also received an amount of $3.5 million for the prevention of flooding and community resilience to the effect of climate change on La Digue, the third most populated island.

The dialogue was done in the framework of Article 8 of the Cotonou Partnership Agreement between the EU and the Africa, the Caribbean and the Pacific (ACP) which will expire in February 2020.