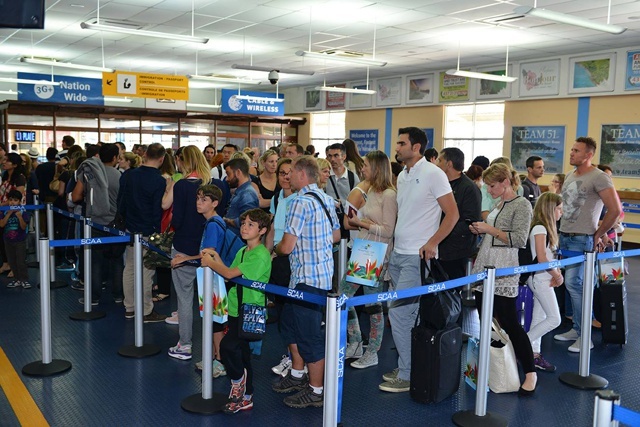 Visitors to Seychelles who have visited Madagascar or transited through that island nation in the last seven days will be placed under observation by health officials upon arrival to Mahe. (Patrick Valmont, Air Seychelles)

(Seychelles News Agency) - Visitors to Seychelles who have visited Madagascar or transited through that island nation in the last seven days will be placed under observation by health officials upon arrival to Mahe.

The Minister of Health, Jean-Paul Adam, made the statement in the National Assembly on Wednesday when answering an urgent question from the Leader of the Opposition, Wavel Ramkalawan.

Adam was called to the National Assembly after the first case of pneumonic plague in Seychelles was confirmed on Tuesday. The patient is a man who returned to Mahe, the main island, last Friday, October 6 on board the last Air Seychelles flight from Madagascar.

The health minister also confirmed that 258 people are currently under observation and receiving treatment after the first case of pneumonic plague was detected.

“The 258 includes 41 passengers and seven crew from the flight, 12 close family members, and 18 staff and patients from the Anse Boileau health centre where the man went when he fell ill.”

The man disobeyed instructions given upon his arrival to remain at home for a period of time and attended a party that same evening.  The minister explained that the result of the tests conducted on the infected man was sent to the Pasteur Institute in Paris, which confirmed the pneumonic plague.

Adam said that “all the 170 people who were at the party including the 13 staff working at the venue are also under passive surveillance.”

“We were already putting Seychellois and tourists under active observation at their homes or at hotels. But as from today, all those arriving from Madagascar will be put in isolation for six days,” the Minister said.

Adam added that the authority will be using the Seychelles Coast Guard military academy as the isolation centre located at Perseverance, a reclaimed island on the outskirts of Victoria.

The national airline -- Air Seychelles -- had suspended all flights to Madagascar, following guidance and requests of the Seychelles' Public Health Authority amid concerns over the outbreak of the plague in Madagascar. To date, there are 449 cases confirmed in Madagascar and 48 people have died. Air Seychelles is the only airline in the region to suspend all its flights to the island.

The health ministry has also liaised with the Seychelles Fishing Authority to get fishermen who may have travelled to Madagascar recently to report their trips and if necessary to seek advice from health professionals.

“We are also in contacts with boats, and we want to urge those who may have travelled to Madagascar informally to stop this practice and to report to their nearest health centres.” Adam said this is important for assessment and also “for us to decide if they need to be placed under surveillance for treatment. We are also liaising with travel agents to discourage people from visiting the island.”

Seychelles, a group of 115 islands in the western Indian Ocean, is on high alert ever since it was confirmed that a Seychellois basketball coach, Alix Allisop who died in a hospital in Madagascar last month, had contracted the plague.

According to the World Health Organisation (WHO), the signs and symptoms of the plague can include sudden fever, chills, painful and inflamed lymph nodes, or shortness of breath with coughing where the saliva or mucus is tainted with blood.