7 great events to have fun at during Seychelles' Creole Festival 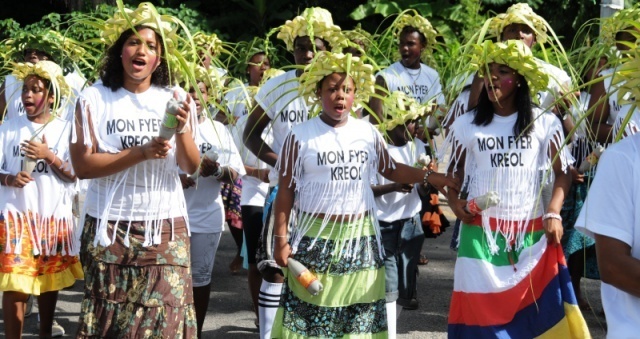 (Seychelles News Agency) - The Creole festival is an annual island-wide party by the Seychellois people to celebrate their roots and traditions. The festival this year is taking place in late October with the official launching on October 20th at the Creole village in the car park of the International Conference Centre in the capital, Victoria.

This week's Seychelles Buzz brings you the highlights of seven activities in this year’s 32nd edition.

This will take place at the International Conference Centre in Victoria on Saturday, October 21 from 2 p.m. It will highlight student’s creativity in songs, dances, poem recital, storytelling and drama. Small entry fee.

Drama enthusiasts are in for a treat during the festival with several theatre events at the International Conference Centre in Victoria. They will include ‘Bal Dan Simityer (Ball in the Cemetery) on Friday, October 20 at 8.30 p.m., Divors Bolot Feray (The divorce of Bolot Feray) on Saturday, October 21 at 7 p.m and ‘Lo Miray Obor Semen’ (On the Wall near the road) on Friday October 27 at 7.30 p.m. Ticket purchase required.

This event is scheduled for Sunday, October 22 at the Beau Vallon community centre. Tifin, which includes a procession from where the wedding ceremony is held to the venue of the celebration, is the opportunity for a visiting couple to tie the knot- for real, the traditional way. It also gives guests at the wedding the chance to wear not just traditional clothes but their finery.

This traditional dance competition is another well-loved activity and this year will feature inter-organisation competitions.  This event will be held on Wednesday, October 25 at the ex-Reef Hotel at Anse Aux Pins. Small entry fee required.

A colourful and traditional procession with Creole music called ‘Laserenad Enternasyonal Viktorya’ will take place in the heart of the capital city, also known as the capital of the Creole world. Creole-speaking countries Mauritius including Rodrigues, Reunion -- a French department in the Indian Ocean, Madagascar, India, Israel, South Africa and South Africa will have displays in the parade alongside local groups.

For the first time this year, the activity will take place at Beau Vallon in the north of Mahe on Sunday, October 29, from 10 a.m. It is a family fun day is for all ages, spent on the beach with the ambience of Creole music, food and drinks.

Two traditional balls are on the programme for this year – one at Reef Hotel and another at the International Conference Centre. Both start at 8 p.m. Apart from dancing the night away to the tunes of local traditional music played by local bands, guests get to savour local snacks and drinks such as toddy, black pudding, as well as soup served in the early hours. The ball ends at 6 a.m.