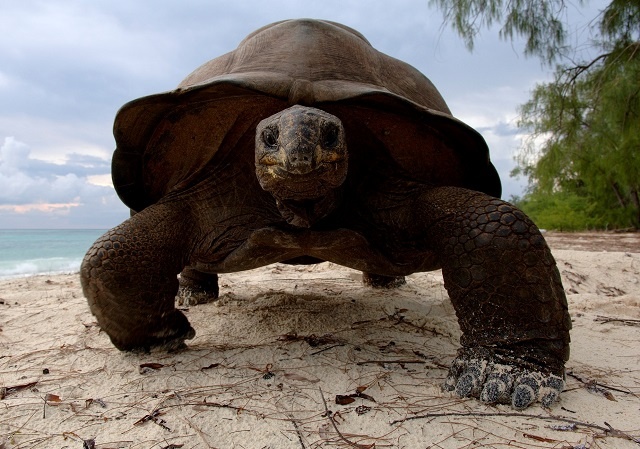 Historically, the giant land tortoises were dominant herbivores on most islands of the Indian Ocean before they were exterminated by 1800. (SIF)

(Seychelles News Agency) - Researchers from the Seychelles Islands Foundation, which manages the remote Aldabra atoll, have introduced new methods to monitor the population of giant land tortoises there.

The Aldabra scientific coordinator, Cheryl Sanchez, told SNA that the team has been using the methodologies --distance transects and sweep surveys -- since August.

“Both methods are common in different parts of the world and are commonly used with tortoises. The combination of these methods will allow us to estimate a population. It will also allow us to collect information on other parametres of tortoise biology,” said Sanchez.

Sanchez said that the new methods were introduced to continue long-term methodologies and that they include additional components to gain further information on these species.

Aldabra atoll is a UNESCO World Heritage Site in Seychelles, a group of islands in the western Indian Ocean. The atoll is home to the largest wild Aldabra giant tortoise population, in the world. The current population of wild giant tortoises on Aldabra, approximately 100,000, is greater than the entire human population of the island nation which is 93,000.  The species has been monitored by the foundation every month since 1998.

However, a review of the data collected over the years identified some shortcomings in the previous studies which is why the team recommended that new methodologies be introduced. These methods are widely used for estimating the density or abundance of populations in the wild within a region.

Detailing the two methods, Sanchez said, "the distance transects will allow management to accurately determine the total population of tortoises on the atoll and also follow its trend.”

“Recorders walk a specific transect and record all tortoises seen. It also notes whether the tortoise is alive or dead,” explained the Aldabra scientific coordinator.

As for the sweep surveys, Sanchez said that it will provide vital information on tortoise biology such as their size, their sex as well as age.

This also gives a better and increased understanding of other factors affecting their population such as their distribution, mortality and reproduction on. Other components of the sweep survey involve identifying and monitoring key tortoises nesting areas, as well as markings and recapture.

“However, the new monitoring programme will incorporate recording and searching for hatchlings, which is also part of the sweep survey,” said Sanchez.  The researcher said that even though Aldabra is thought to have the largest population of giant land tortoises anywhere else in the world, as of now they cannot collect data on newborns.

The distance transects will be conducted using distance pointers while the sweep surveys will be recorded directly on a handheld device called the Trimble, enabling a standardised and more efficient data collection process.

The team took almost a year to set this new protocol for monitoring in partnership with foreign researchers and the Zurich Aldabra research platform team. The new survey methods were then presented to the research team and a field training was also conducted. Its implementation marks a milestone for Aldabra research.

The surveys will be conducted twice a year at several locations and will also encompass different types of vegetation.

Historically, the giant land tortoises were dominant herbivores on most islands of the Indian Ocean. All seven species that formerly lived on Madagascar, Mauritius and La Reunion were exterminated by 1800 by early settlers and sailors who killed them for their meat.

After over 100 years of exploitation, the giant tortoise population on Aldabra was similarly in serious danger of becoming extinct. The situation continued until 1900, when Charles Darwin, an English naturalist best known for his contributions to the science of evolution, was enlisted to work with the government of Mauritius to establish a reserve on the atoll.