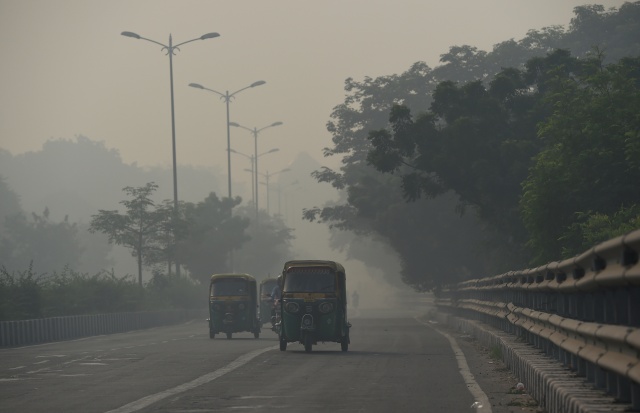 (AFP) - New Delhi was shrouded in a thick toxic haze Friday after a night of frenzied Diwali fireworks sent the air quality plummeting despite a ban on sale of fireworks aimed at thwarting a repeat of an 'airpocalypse'.

India's Supreme Court had banned the sale of firecrackers ahead of the Hindu festival of lights to prevent a repeat of last year's post-Diwali air pollution crises that left Delhi's 20 million residents gasping for weeks.

But late Thursday the readings for the pollutants hovered around 1,100 microgram per cubic metre in some parts of the city -- 11 times above the prescribed air quality levels of World Health Organisation.

Residents of Delhi, rated the most polluted city by WHO in 2014, showed little consideration for the ban, purchasing crackers illegally or using those bought earlier.

The levels had subsided through the night but were still "hazardous" in several districts across the capital Friday morning.

Levels of PM2.5 -- the fine particles linked to higher rates of chronic bronchitis, lung cancer and heart disease -- have soared since the beginning of October when millions of farmers in the city's north burn post-harvest crop residue.

The city's quality steadily worsens at the onset of winter, a consequence of rapid urbanisation that brings pollution from diesel engines, coal-fired power plants, industrial emissions and atmospheric dust.

The court on October 9 had banned sale of firecrackers across the city in anticipation of last year's catastrophic levels of pollution. But it did not put any restrictions on bursting of fireworks.

Last year's Diwali festivities spiked pollution levels to a record high -- the worst in nearly two decades -- forcing the government to shut schools and close down a coal-fired power plant.

On Tuesday an environmental watchdog ordered the shutting down of all diesel generators and the city's lone coal-fired power plant as part of a slew of measure to curb pollution.

Experts however say the air quality will remain considerably cleaner this year, thanks to a favourable wind system.

"The wind system will not allow stagnation of smoke over the city. We will have better air this time," said Gufran Beig, chief scientist at India's state-run System of Air Quality Weather Forecasting and Research.