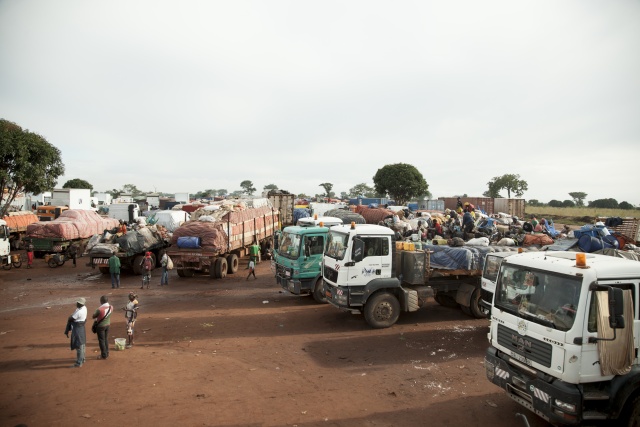 Residents walk next to trucks lined up in a car park of Bossembele in the Central African part of the Douala-Bangui corridor on October 16, 2017. The "corridor" is the only supply road to Bangui, the isolated capital in the heart of Central Africa. The tensions arising from the recent conflict are reducing but challenges are still numerous: roads in poor condition, racketeering of truck drivers, theft of goods, administrative long-windedness... (FLORENT VERGNES / AFP)

(AFP) - UN Secretary General Antonio Guterres is expected to arrive in the Central African Republic on Tuesday, as violence between Muslim and Christian militias has intensified in the past few months.

"This is a gesture of solidarity with the peacekeepers working in one of the most dangerous environments," Guterres said in an interview with AFP and Radio France Internationale (RFI).

His trip to one of the world's poorest countries will be his first as part of a peacekeeping mission since taking office on January 1 -- but he regularly visited the country as former head of the UN refugee agency UNHCR.

The secretary general's visit comes at a time when the United Nations faces a precarious financial situation, as the United States pushes for cost-cutting measures in peacekeeping.

The international body has maintained some 12,500 troops and police on the ground in the Central African Republic since September 2014 to help protect civilians and support the government of Faustin-Archange Touadera, who was elected last year.

Its mandate expires on November 15, 2017 but is expected to be renewed.

For Guterres -- whose visit coincides with "United Nations Day" marking the entry into force of the UN charter -- "the level of suffering of the people but also the trauma suffered by aid workers and peacekeepers are deserving of our solidarity and heightened attention".

One of the world's poorest nations, the Central African Republic has been struggling to recover from a three-year civil war between the Muslim and Christian militias that started after the 2013 overthrow of leader Francois Bozize.

Between 2013 and 2016, acting under a UN mandate, France intervened militarily to push out the Muslim Seleka rebels and the United Nations launched its MINUSCA peacekeeping mission in 2014 -- but the country remains plagued by violence.

Since May, renewed clashes in the southeast have pitted armed groups against each other as they compete for control of natural resources and areas of influence, while claiming to protect communities.

MINUSCA said Friday that at least 26 people were killed during clashes in the town of Pombolo, while another 11 were wounded.

Since the beginning of the year, 12 aid workers and 12 peacekeepers have also been killed -- six peacekeepers alone in Bangassou where Guterres is expected to make a stop.

"He wants to go honour the fallen," a UN source in Bangui said.

Touadera visited Bangassou earlier this week as well in a bid to reassert authority in the southeastern region -- where much of the growing unrest has been concentrated.

Guterres's trip, just weeks before the likely reappointment of MINUSCA, would also send a strong political message amid criticism of the UN mission.

Accused of "passivity" by critics and sometimes even "collusion" with armed groups, UN troops are also facing an avalanche of sexual abuse and rape allegations.

MINUSCA has been hit with the highest number of rape charges of all UN missions, prompting Guterres earlier this year to agree to the withdrawal of a 600-troop contingent from Congo Republic which had faced several accusations.

About 120 Congolese peacekeepers were dismissed for similar reasons last year.

Guterres will meet with some of the victims and their families as part of his effort to address the damaging allegations, accompanied by Jane Connors, the first United Nations advocate for victims' rights.

The conflict has driven more than 600,000 people from their homes internally while an additional 500,000 have crossed borders to become refugees, according to UN figures.

Half of the population, or 2.4 million Central Africans, depend on humanitarian aid.

The worsening violence has prompted some UN officials to raise alarm over "early warning signs of genocide" in CAR, as did former UN aid chief Stephen O'Brien in late August.

Adama Dieng -- the UN's special advisor for the prevention of genocide who visited the country in early October -- denied the country was in a "pre-genocide situation" but said the situation there is "serious".

There are still "indicators" that could result "in crimes of genocide" if they are not tackled, he said.

Touadera, whose election with the full support of the UN and France sparked a wave of hope, also pushed back on the warnings, saying "talk about genocide at this stage ... is not justified".

Guterres previously said there was "ethnic cleansing" in many parts of the country, but he will invariably be asked to comment about genocide.

To the displaced population, a visit from Guterres is a welcome relief.

"The peacekeepers must help us more and be more visible," said Regis, who was forced to flee from the east of the country to Bangui. "It is imperative that the UN chief make them understand that".