EU vows to aid Sudan for 'as long as it takes' 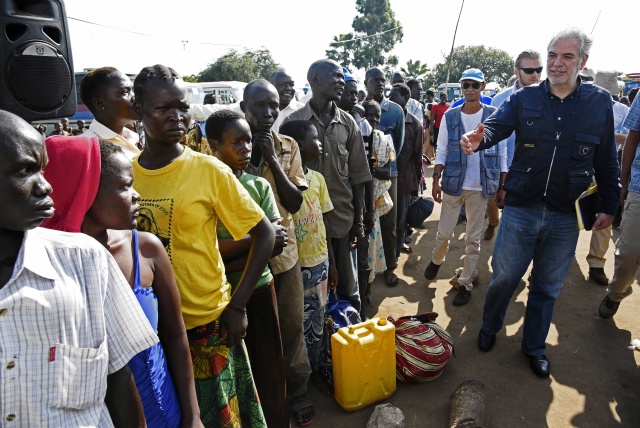 EU Commissioner for Humanitarian and Crisis Management, Christos Stylianides speaks with newly arrived refugees from South Sudan as they queue in line waiting to be registered on November 11, 2016 at Kuluba Reception Centre in Koboko District, North of the capital Kampala. Uganda, one of the world's poorest countries, currently hosts 530,000 South Sudanese refugees, 330,000 of whom fled fighting in the world's newest country this year alone. (ISAAC KASAMANI / AFP)

(AFP) - Even as global donors reduce their aid offerings to war-torn Sudan, the European Union has vowed to provide the African country with humanitarian assistance for "as long as it takes".

On Monday, the EU offered a new 106-million-euro ($124 million) aid package to Sudan at a time when the United Nations has managed to raise only 39 percent of its overall 2017 aid appeal for the country, where millions still live on foreign aid.

"There is no doubt that the overall humanitarian situation in Sudan remains very concerning," the EU's Commissioner for Humanitarian Aid, Christos Stylianides, told AFP in an interview late on Monday after wrapping up a two-day visit to Sudan including to parts of conflict-wracked Darfur.

"We will continue to provide this assistance as long as it takes."

Urging other global donors to follow the EU, Stylianides said it was justified to aid Sudan as it has millions of displaced people who need assistance and hosts almost a million refugees, half of them South Sudanese.

Tens of thousands of people have been killed and millions displaced in Sudan's three conflict areas of Darfur, Blue Nile and South Kordofan due to fierce fighting between government forces and rebels.

Some 461,000 refugees have also arrived in Sudan since December 2013 when a brutal civil war erupted in South Sudan, the world's youngest country formed after it split from the north in 2011.

The EU has mobilised some 422 million euros for meeting Sudan's humanitarian needs since 2011.

Of the new 106-million-euro aid package, 46 million will be to provide food, nutrition, health and education, while the rest will be channelled to help displaced people, migrants and host communities.

Even as Sudan's humanitarian needs grow "day by day", Stylianides acknowledged that there were only limited funds available.

For 2017, United Nations aid agencies have managed to raise only 39 percent of the $804 million asked for.

The UN says the lack of funds has already led to dozens of health facilities being closed in Darfur, Blue Nile and South Kordofan.

"We need more funding, we need more donors in order to engage in these difficult situation," Stylianides said.

It is all the more essential that aid reaches targeted people, he said, and that Khartoum gives "unrestricted access" to aid workers.

"This is not negotiable," Stylianides said.

Aid workers acknowledge that since the middle of 2016, Khartoum has given increasing access even to what were previously no-go areas, especially after Washington made it a key condition for lifting its decades-old trade embargo imposed on Sudan.

The embargo was officially lifted from October 12.

"But we have to see more and more improvement in these very difficult things, because without access the humanitarian workers cannot reach the vulnerable people," he said.

Campaign groups like the Washington-based Enough Project charge that millions of euros provided by the EU were being used to build capacities of Sudanese security forces for stopping the flow of migrants coming to Europe through Sudan.

Stylianides said EU aid was not distributed through the Sudanese government at all, and the bloc was in fact focussing on how to develop Africa itself.

"The first priority is to deal with root causes, is to seek investment in Africa through our investment plan, to create jobs for the youth in Africa, and of course at the same time to see growth in African countries," he said.