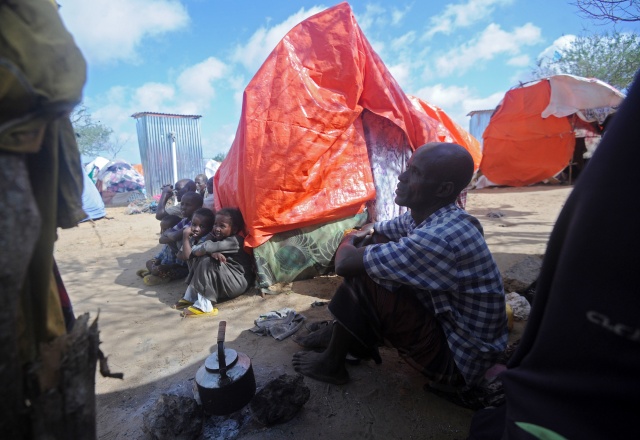 Displaced Somali people sit outside makeshift tents on May 24, 2017 at a camp in the Garasbaley area on the outskirts of the capital Mogadishu, where people converge after fleeing their homes due to the dire drought that hits the country. The World Health Organization warned in April that the drought was fuelling an outbreak of cholera and acute diarrhoea in Somalia that has already killed hundreds of people. The warning came as Somalia faces the threat of its third famine in 25 years of civil war and anarchy. (MOHAMED ABDIWAHAB / AFP)

(AFP) - The United States will resume accepting refugees after a 120-day ban, but arrivals from 11 "high-risk" countries, most of them home to Muslim majorities, will still be blocked, officials announced Tuesday.

The temporary ban, which President Donald Trump fought to implement since January and finally proceeded with in late June after a Supreme Court decision, allowed officials to review security procedures and set tougher screening procedures.

Jennifer Higgins, associate director for refugees at the US Citizenship and Immigration Services agency, said applicants will face "enhanced" vetting as a result of the review, including more in-depth checks of their social media presence and connections.

"The security of the American people is our highest priority," she told journalists in a briefing.

Trump issued a new executive order on refugees late Tuesday that replaced the expiring one, which was a part of his controversial travel ban that evoked a series of court challenges on the grounds it targeted Muslims.

The new order will accompany a sharp cutback on refugee admissions under Trump.

But after becoming president, Trump slashed that to 53,000 even as he fought to put in place a full ban.

Officials declined to list the 11 countries, but said they are the same as on a 2015 list for tougher screening, requiring a "Security Advisory Opinion."

They are now subject to another 90-day security and intelligence review, but the officials would not say what could happen then.

All but North Korea are mainly Muslim populations, and in the past have been the source of the largest portion of US refugee admissions.

They represent close to half of all the refugees entering the United States. In fiscal 2017, out of 53,716 refugees the US accepted, 22,150 came from Syria, Iraq, Iran and Somalia.

The officials said the government would still review certain special cases from the 11 countries, without describing what would qualify them.

Kathleen Newland, a senior fellow of the Migration Policy Institute, said there is significant backup of refugees already with approval waiting to get into the United States.

But the net effect over the longer term will be that the top United Nations refugee official will not be able to lean on the United States to accept as many people as in the past.

"I expect they just won't be referring as many cases for US resettlement," Newland said.

General » Be a reporter: Write and send your article » Subscribe for news alert
Tags: US, politics, immigration, refugee