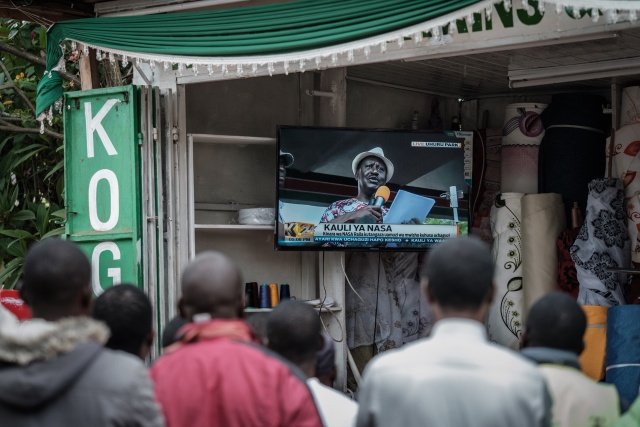 Supporters of Raila Odinga, leader of the National Super Aliance (NASA), the Kenya's main opposition coalition, watch as he calls for boycott of the presidential re-run election on TV in Kisumu, an opposition stronghold in western Kenya, on October 25, 2017. Kenyan opposition chief leader urged his supporters to stay at home on October 25 as the country forges ahead with a disputed presidential poll that could threaten the stability of the east African powerhouse.(YASUYOSHI CHIBA / AFP)

(AFP) - A divided Kenya heads to the polls on Thursday in a bitterly disputed presidential re-run that has sparked fears both at home and abroad for the stability of the east African powerhouse.

It will be the second time in three months that Kenyans vote after the August victory of President Uhuru Kenyatta was overturned by the Supreme Court in an unprecedented ruling that unleashed the country's worst political crisis in a decade.

Kenyatta, who turns 56 on Thursday, is almost assured victory after his chief rival Raila Odinga withdrew from the race, citing fears the poll would be marred by the same flaws which saw the August vote overturned.

But despite weeks of sometimes deadly protests and a host of last-minute court challenges over the election's legality, officials confirmed Wednesday it would go ahead, giving Kenya's 19.6 million voters a fresh opportunity to choose their leader.

With the country on tenterhooks, Odinga gave a final address to supporters on the eve of the ballot, urging them to "stay at home" in a move likely to ease concerns over election day violence.

With eight candidates in the running, the vote was essentially a showdown between Kenyatta and Odinga, whose families have been locked in political rivalry for more than half a century.

But with Odinga shunning the vote, all eyes will be on his supporters, particularly those in his western stronghold of Kisumu, Kenya's third city where police and protesters have fought running street battles and election officials have largely stayed away for fear of being attacked.

"I fear for my life, yes. I don't know if I will come to the polling station tomorrow," one official told AFP.

With security tight, voting will begin at 6:00 am (0300 GMT) in Kenya's 40,883 polling stations, although it was unclear how many of them would be operational.

In Kisumu, officials said only five out of some 400 election officials had shown up for a pre-election briefing.

And there was no sign of any preparations under way at a downtown park which is slated to host the city's largest polling station, with an AFP correspondent saying the same was true across Kisumu's central and eastern districts.

"We will block the election tomorrow, we will block polling stations if IEBC tries to open them, even if we have to face the police to do that," demonstrator John Atuoto told AFP at the city's Kondele slum, referring to the electoral commission.

But others pledged to stay home. "We don't want elections, we will stay at home," said moto taxi driver Gordon Oyeke, 35. "Why fight for something we don't want and risk getting hit by bullets by the criminal police?"

Some 37 people were killed in violence which erupted after the August vote, most shot dead by police in poor opposition strongholds. Another three died in protests earlier this month, all in the Kisumu area.

But it is a far cry from the politically driven ethnic bloodshed which followed the 2007 election and claimed more than 1,100 lives.

The decision to cancel the August vote over irregularities in the electronic transmission of votes was initially hailed as an opportunity to deepen democracy in a country plagued by disputed elections.

But the re-run has been dogged by chaos and acrimony, with attacks on polling officials and a general atmosphere of intimidation, prompting top diplomats to blast Odinga and Kenyatta for fuelling division instead of seeking a path to a free and fair election in this country of 48 million.