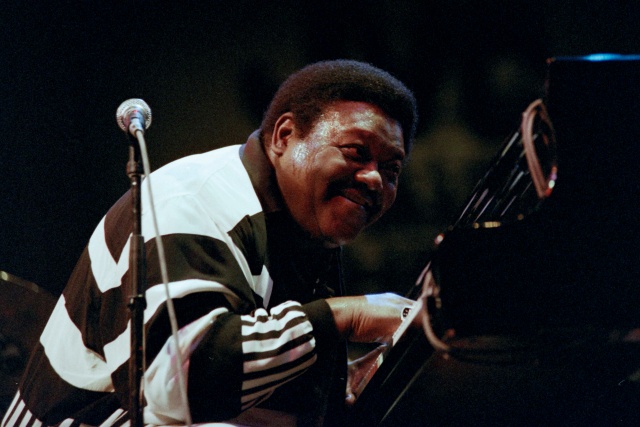 A file picture taken on July 8, 1992 shows US pianist and singer-songwriter Fats Domino performing on the piano during a concert at the concert hall in La Villette during the Jazz Festival in Paris. Domino, the rhythm and blues pianist whose rollicking style helped give birth to rock 'n' roll, died on October 25, 2017, the coroner said. He was 89. An official at the coroner's office in Domino's lifelong home of New Orleans confirmed his death, which was earlier announced by the rock legend's daughter to a local television station. (Bertrand GUAY / AFP)

(AFP) - Fats Domino, whose rollicking boogie-woogie piano helped give birth to rock 'n' roll, has died in his lifelong home of New Orleans, the coroner said Wednesday. He was 89.

One of the top-selling artists of the 1950s, Domino had been hailed as an indispensable influence by legends including Elvis Presley, Bob Marley and especially The Beatles, who called his music their first encounter with rock.

The famously reclusive musician, who had made few public appearances over the past decade, died Tuesday morning of natural causes, said Gerry Cvitanovich, the coroner of Jefferson Parish.

"He was a world-class musician, known for his shaping of rock 'n' roll as we know it," New Orleans Mayor Mitch Landrieu said in a statement.

Despite finding global fame, Domino never moved out of the working-class Lower Ninth Ward of New Orleans where he and his late wife Rosemary raised eight children and he would sometimes be spotted sleeping outside in a hammock.

In his heyday Domino rivaled Presley in record sales and for the crown of King of Rock 'n' Roll. But with a natural shyness, and segregation still reigning in much of the United States, the self-effacing Domino faded in prominence by the mid-1960s as a crop of swaggering rock stars came to dominate pop culture.

Born as Antoine Domino, the plump pianist picked up his nickname early -- which was cemented by the success of 1949's "The Fat Man," the first rock 'n' roll single to sell one million copies as post-World War II consumer culture took root.

With his rhythm-and-blues piano backed up by an energetic back-beat, Domino on "The Fat Man" offered self-deprecating humor -- "They call me the fat man / 'Cause I weigh 200 pounds" -- and turned his voice into a trumpet-like instrument, singing, "Wah-wah-wah, wah-wah."

He later recorded hits that became omnipresent on American jukeboxes such as "Ain't That a Shame," "Blueberry Hill," "I'm Walking" and "It's You I Love."

Domino was part of the first group inducted into the Rock and Roll Hall of Fame in 1986.

Beach Boys songwriter Brian Wilson said Domino dominated the radio as he was young, tweeting: "He was a great singer and piano player and his music will last forever."

The Beatles requested to see Domino when they first played New Orleans in 1964, with the Fab Four grinning in a huddle around him.

John Lennon said "Ain't That a Shame" was the first song he learned to play, while Paul McCartney later channeled Domino on the 1968 track "Lady Madonna" -- which Domino in turn covered in his last hit.

Born to a French Creole family of limited means, Domino as a child would work hauling ice in notoriously humid New Orleans in the age before air-conditioning. With most homes then keeping pianos, Domino would stop to play as he dropped off the often gigantic chunks.

Inspired by boogie-woogie pianists such as Meade Lux Lewis, Domino became innovative on the keys, notably with his use of triplet notes which added to the vibrant rhythms. He honed his musical skills with his father, a fiddler, and a brother-in-law who played banjo.

Domino found a global audience after being sought out by Lew Chudd, a Canadian-born advertising salesman who had seen the potential of recorded music and earlier worked with the jazz clarinetist Benny Goodman.

Domino signed onto the new Imperial Records, where he would co-write songs with longtime collaborator Dave Bartholomew, a New Orleans trumpeter.

"Ain't That a Shame" marked a turning point for Domino and rock history. Working for the first time outside New Orleans, he recorded the song in Hollywood where Imperial Records seized on early studio effects to make the track more lively and less bluesy.

The 1955 song was the first by an African American artist to triumph on the US pop charts. He was soon performing on national television programs including "The Ed Sullivan Show" and touring the country.

But several of his shows in the segregated South were disrupted, with Domino -- like Chuck Berry soon after him -- offering the then unprecedented mix of music loved by both whites and blacks in venues with dancing and alcohol.

While his music helped break down the color barrier, Domino was soft-spoken. In a rare interview in 2004, he said he had grown up accustomed to segregation.

"That's the way it was when I started out," he told the New Orleans music magazine Offbeat. "I knew what they had going on so it was no use me trying to do anything about it. I just went along and did my thing."

He said he never thought of leaving New Orleans. Even when touring, he would often cook up shrimp for gumbo and other quintessentially Louisiana dishes.

Domino was briefly unaccounted for when Hurricane Katrina inundated the Ninth Ward of New Orleans in 2005. He was evacuated by boat and a year later released a final album, "Alive and Kicking," to benefit artists hit by the tragedy.

General » Be a reporter: Write and send your article » Subscribe for news alert
Tags: Obit Entertainment, US, music, Domino