Kenya counts votes, and the cost of a violence-hit election 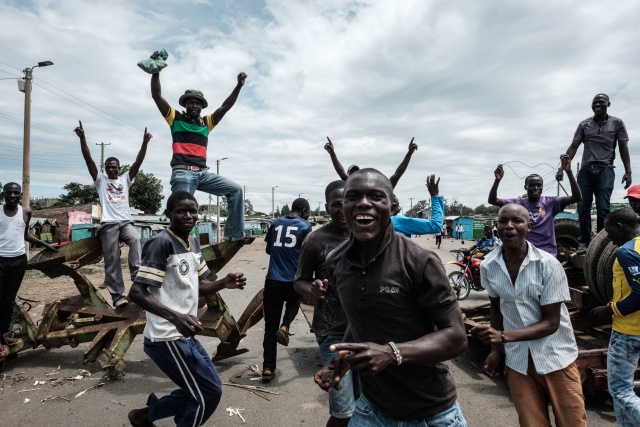 National Super Alliance (NASA) supporters react on their barricade point during their demonstration in Awasi, about 40km east from Kisumu, Kenya, on October 26, 2017, during Kenya's re-election voting. Kenya's polls chief said the presidential election re-run would be postponed in four counties hit by violence during voting on October 26, resulting in at least three deaths. (YASUYOSHI CHIBA / AFP)

(AFP) - As polling officials tallied votes, Kenyans counted the cost Friday of a deeply-divisive election marred by an opposition boycott and protests that left at least four dead and scores wounded.

The election came after a two-month political drama that began when the Supreme Court overturned the victory of President Uhuru Kenyatta in August 8 elections due to "irregularities".

However, although the ruling was initially hailed as a chance to deepen democracy in one of east Africa's most stable nations, its impact quickly soured, unleashing weeks of angry protests, acrimonious political rhetoric and intimidation of election officials.

And Odinga's boycott of the re-run, on grounds the election commission had failed make the necessary changes to ensure a free and fair vote, has assured Kenyatta a landslide victory.

But as polling officials carefully counted the ballots, some under close police protection, difficult questions remained over the credibility of an election boycotted by a large part of the 19 million registered voters.

Estimated figures compiled by the election board pointed to a turnout of just 48 percent.

If confirmed, it would be a huge fall from the nearly 80 percent rate in the August poll, which was won by Kenyatta but overturned by the Supreme Court in an unprecedented ruling that has sparked weeks of protest and acrimonious debate.

While the August election saw long queues of voters and ballots being cast long after closing time in some places, Thursday's vote was a different story with many polling stations empty or welcoming only a trickle of people.

Election chief Wafula Chebukati said the ballot would be postponed until Saturday in four protest-hit counties in the country's west: Kisumu, Homa Bay, Migori and Siaya.

The move, he said, was due to "security-related" challenges.

But the governor of Kisumu, an opposition stronghold in western Kenya where violence raged on Thursday, rejected the move, saying people would not vote while they were "mourning".

He said he had invited Odinga and top leaders of his National Super Alliance coalition (NASA) to visit the city on Friday.

At least four people were shot dead and around 50 others wounded, most of them by live bullets, on Thursday, according to an AFP tally of figures from officials and medics.

"This is crazy, they are shooting at us -- we are demonstrating and they shoot us!" said Samuel Okot, 20, who was sitting with his friend Joseph Ouma who had been shot in the knee and was howling in pain.

"What kind of country is this?"

One of the dead was 19-year-old George Odhiambo who died from blood loss after being shot in the thigh during clashes in Kisumu, police and hospital sources said.

A second person died from a gunshot wound to the leg in Kisumu, police said, after a polling centre was "stormed" by a mob.

Police said another man was shot dead in Homa Bay, also in the west, "where a large mob attacked a small police facility" prompting officers to open fire "to protect themselves".

And a fourth man was shot dead in Nairobi's Mathare slum, another hotspot in the capital where police fired water cannon and teargas to disperse demonstrators.

The confirmed casualties raised to 44 the tally of people killed in election-related violence since the August poll.

The crisis is the worst since a 2007 election sparked politically-driven ethnic violence that left 1,100 dead.

In the first election, turnout was nearly 80 percent among the 19 million registered voters. Kenyatta secured victory with 54 percent of the vote, while Odinga came second with 45 percent.

Odinga, 72, is a veteran opposition leader who followed in the footsteps of his father and inherited a dynastic rivalry with Kenyatta whose father was the country's first post-independence president.

Africa » Be a reporter: Write and send your article » Subscribe for news alert
Tags: Kenya, Vote