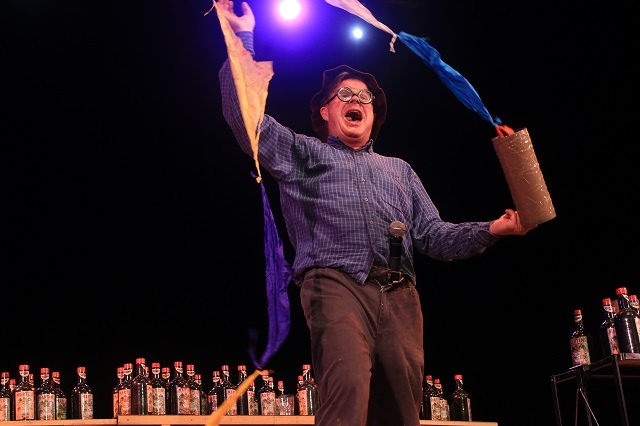 The main magician leading the delegation of 10, Hugues Protat, said that he is delighted to perform in Seychelles. (Joe Laurence, Seychelles News Agency)

(Seychelles News Agency) - A group of magicians from the Normandy region in France have enthralled the locals with a spectacular magic show as part of a four-day tour on the island nation. The main show was held for free on Thursday evening at the International Conference Centre in the capital city of Victoria.

The entertainers performed a range of live magic including card tricks, close-up magic, mask shows and Chinese shadow - a performance using their arms and fingers.

“It is the first time that the Seychellois people is able to experience a unique spectacle staged by magicians of this calibre,” said Francis Herbert, the Seychelles' consul in France.

The magicians will be performing another show at Berjaya Beauvallon Bay Hotel, in the north of Mahe on Saturday.

Speaking to SNA after the show, the main magician leading the delegation of 10, Hugues Protat, said that he is delighted to perform in Seychelles.

“The rest of the team is also happy to be here to share our art which has taken us years of practice to perfect,” said Protat. “We gave a world class performance tonight.”

The magician, who won the prize as France’s youngest magician at the age of 16, said that they have to practice several times before any show. “Preparation can get very physical as you need to get the hang of how to be precise and calm. Concentration is also important as one single mistake can jeopardize your whole act.”  The show, also included acrobatic as well as musical performances.

Enrique Sophola, an audience member, said the show was one of a kind which he has never seen before. “It was full of suspense and you could hear the crowd going ‘wow’ every now and then.”

Herbert said the French group, came to the islands at the invitation of senior citizens from Anse Royale, a district in the southern part of the main island of Mahe.The visit is part of a cultural exchange, he said.  “As part of the exchange, we organized a magic festival where we presented a few magicians. The group from Anse Royale was very enthusiastic and asked for the magicians to stage a show in Seychelles.”

Hebert said that the visit also coincides with the annual cultural exchange between Normandy – a region in the north of France -- and the Seychelles, a group of 115 islands in the western Indian Ocean.