Spain readies to impose direct rule as Catalonia fights back 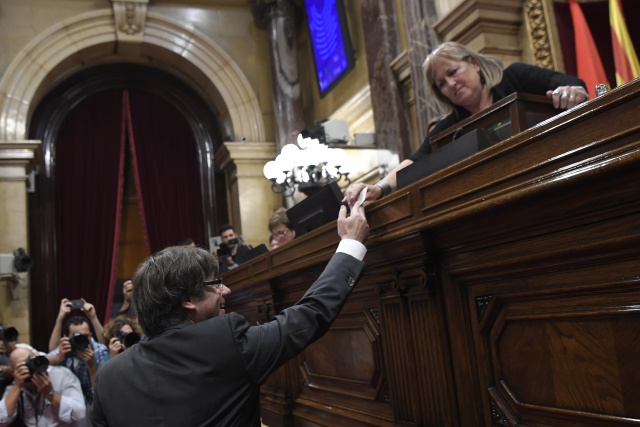 Catalan president Carles Puigdemont casts his vote for a motion on declaring independence from Spain, during a session of the Catalan parliament in Barcelona on October 27, 2017. Catalonia's parliament voted to declare independence from Spain and proclaim a republic, just as Madrid is poised to impose direct rule on the region to stop it in its tracks. A motion declaring independence was approved with 70 votes in favour, 10 against and two abstentions, with Catalan opposition MPs walking out of the 135-seat chamber before the vote in protest at a declaration unlikely to be given official recognition. (LLUIS GENE / AFP)

(AFP) - Spain's premier urged senators Friday to grant him the power to impose direct rule on Catalonia, where separatists fought back with a proposed independence bid.

As the months-long standoff between Spain and the rebel region came to a head, Prime Minister Mariano Rajoy asked lawmakers to "proceed to the dismissal of the president of the Catalan government, his vice-president and all regional ministers".

In response, Catalan separatist parties filed a draft resolution in the regional parliament to "declare Catalonia an independent state in the form of a republic".

Thousands of activists gathered outside the Catalan parliament, which met for a special sitting, to add their voices to the push for a break with Spain.

Roughly the size of Belgium, the semi-autonomous northeastern region accounts for about 16 percent of Spain's population and a fifth of its economic output.

In Madrid, the senate was poised to vote on measures under Article 155 of the constitution to depose Catalonia's secessionist government before the week is out, after the region held an unlawful independence referendum on October 1.

Rajoy sought to place the blame for Spain's worst political crisis in decades squarely on the shoulders of Catalonia's separatist leader Carles Puigdemont.

The steps were not aimed against Catalonia, he insisted, but "to prevent abuse of Catalonia" by its own leaders.

"What threatens Catalonia today is not Article 155, but the attitude of the Generalitat" -- the regional government, said Rajoy -- who received a standing ovation.

Spain has been engulfed in a constitutional crisis since a "Yes" vote in the unregulated plebiscite which separatist leaders hold up as a popular mandate for independence for the wealthy region of 7.5 million people.

Only about 43 percent of voters turned out, with many anti-secessionists staying away and others prevented from casting their ballot by Spanish police in a crackdown that turned violent.

Based on the vote, Puigdemont threatened to declare independence for a region where resentment to Madrid's perceived interference has been growing for years.

Madrid turned to Article 155 -- a never-before-used provision designed to rein in rebels among Spain's 17 regions, which enjoy varying levels of autonomy.

Puigdemont, who opted Thursday not to call regional elections that may have kept Madrid at arm's length, has warned that any power seizure would escalate the crisis.

Instead, he left it up to the regional parliament "to determine the consequences" of the threatened takeover -- thus leaving the door open for a possible independence push.

As Catalan lawmakers met Friday, opposition parties said they will not participate in a vote on independence on what one described as "a dark day" for democracy.

"This text you drafted destroys what we hold most sacred: coexistence" in Catalonia, opposition MP Carlos Carrizosa told Puigdemont, gesturing to the draft resolution.

Thousands of activists gathered in Barcelona under the banner: "The Republic awaits, let's defend it."

Some sported pro-independence banners, others waved the red-and-yellow Catalan flag to send a message to lawmakers.

There was protest inside the building too, with about 200 separatist mayors, in full regalia, chanting "Independence", until being silenced.

For Lluisa Pahisa, a 65-year-old municipal councillor, this "could be a historic day for Catalonia" -- the day a republic is declared.

"I woke up with a lot of enthusiasm," she told AFP, but added: "Until I see it done, I won't believe it."

Measures drawn up under Article 155 are set to enter into force on Saturday, and will see the central government temporarily seize control of Catalonia's civil service, police, purse, and public broadcaster.

They would remain in place until elections for a new regional parliament.

The move is likely to anger Catalans -- fiercely protective of their language, culture and autonomy, even if they are deeply divided on independence from Spain.

Albert Botran, a CUP lawmaker, vowed Friday to "make it difficult for the new, illegitimate government."

"The first action will be resistance," he told Catalonia Radio.

Fears for Catalonia's economy have increased as uncertainty persists over the independence drive, with some 1,600 companies having moved their legal headquarters out of the region in recent weeks.