Barzani to step down as Kurdish leader in Iraq 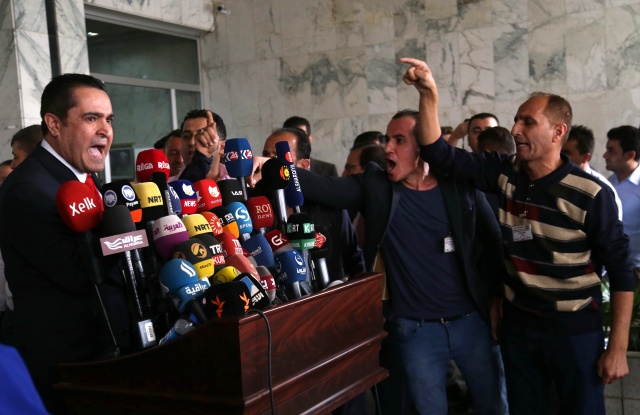 Iraqi Kurdish men protest as Rabon Maarouf, an independent member of Kurdistan's parliament, gives a press conference outside the parliament, in Arbil, the capital of Iraq's autonomous northern Kurdish region, on October 29, 2017. Massud Barzani, the president of the autonomous Kurdish region in Iraq, told a closed-door session of parliament he was stepping down amid the fallout from a controversial independence referendum.(SAFIN HAMED / AFP)

(AFP) - Massud Barzani, the president of Iraq's autonomous Kurdish region, told a closed-door session of the regional parliament Sunday he was stepping down amid the fallout from a controversial independence referendum.

Kurdish forces agreed Sunday to surrender to central government control the strategic border post of Fishkhabur, through which pipelines export oil to Ceyhan in Turkey.

That came after weeks of armed clashes in which Baghdad reasserted control over swathes of oil-rich Kurdish-held territory, dealing a severe blow to Barzani's ambitions of Kurdish statehood.

"After November 1, I will no longer exercise my functions, and I reject any extension of my mandate," 71-year-old Barzani said in a letter read out to parliament in the Kurdish capital Arbil, a copy of which was obtained by AFP.

"Changing the law on the presidency of Kurdistan or prolonging the presidential term is not acceptable," it read.

"I ask parliament to meet to fill the vacancy in power, to fulfil the mission and to assume the powers of the presidency of Kurdistan," the letter said.

Barzani, who organised the September 25 referendum in defiance of Baghdad and world powers, said he would "remain a peshmerga" (Kurdish fighter) and "continue to defend the achievements of the people of Kurdistan".

After the letter was read, the parliament decided on a provisional redistribution of Barzani's powers until a presidential election, for which a date has yet to be fixed.

Both presidential and legislative elections had originally been slated for November 1, but these were postponed in the chaos that followed the poll, in which Kurds overwhelmingly backed independence.

Dozens of men wielding sticks and stones rushed at the parliament building late Sunday, hitting out at journalists, according to media reports and MPs.

Police fired in the air to disperse them.

The opposition Goran party, which had sought Barzani's resignation and a "government of national salvation", opposes the redistribution of the presidency's powers.

Barzani "symbolises the failure of Kurdish politics, and the only thing left for him to do is to issue a public apology," Goran MP Rabun Maarouf said before the session began.

Barzani hit back in a televised address later Sunday and denounced the "high treason on October 16", in reference to the a PUK withdrawal from Kirkuk without resisting the advancing government forces.

PUK leaders said they had agreed the retreat with Barzani.

In a sweeping advance into disputed territories, Iraqi forces seized key oilfields in and around the province of Kirkuk, dealing a devastating blow to Arbil's finances.

The loss of the oilfields, which provided income that would have been critical to an independent Kurdish state, sparked recriminations among Kurds and ratcheted up the pressure on Barzani to quit.

Clashes continued Thursday around the disputed Fishkhabur post on the Turkish border, but on Sunday, a government source in Baghdad told AFP that a deal had been reached under which Baghdad's forces would deploy there.

Political life in Kurdistan is dominated by Barzani's KDP and the PUK of Iraq's late president Jalal Talabani.

Iraq's current president, Fuad Masum, is also a PUK member and had backed a push for dialogue between the Kurds and Baghdad before the referendum.

After the vote, Masum blamed the referendum for triggering the assault on Kirkuk.

Iraq's neighbours Turkey and Iran, which have their own Kurdish minorities, also strongly opposed the non-binding vote.

Ankara on Thursday said the Iraqi Kurdish offer to freeze the referendum was "not enough", urging the Arbil government to cancel it entirely.

Barzani's move comes as Abadi's forces clash with Islamic State group jihadists in what the premier called "the last den of terrorism in Iraq", the town of Al-Qaim on the Syrian border.

The mandate of Barzani, the first and only elected president of the autonomous Kurdish region, expired in 2013.

It was extended for two years and he kept office throughout the chaos that followed the sweeping IS offensive across Iraq in 2014.