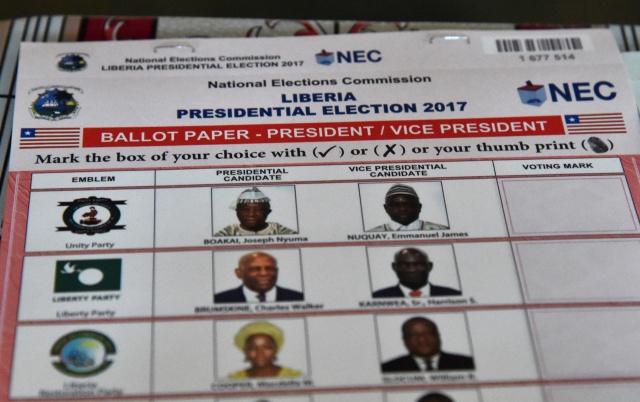 (FILES) This file photo taken on October 10, 2017 shows a ballot paper at a polling station in Monrovia during presidential and legislative elections. "REMEMBER TO VOTE" wrote Liberia's National Elections Commission (NEC) on its Facebook page on October 26, 2017, a daily reminder to Liberians that the final stage of selecting their president is fast approaching. Former international footballer George Weah and incumbent Vice President Joseph Boakai face a runoff for Liberia's presidency on November 7 -- a crucial test of the country's stability. (ISSOUF SANOGO / AFP)

Liberia's top court has reviewed a legal complaint backed by three political parties and found "constitutional issues raised" by the electoral commission's actions during an October 10 presidential election, it said on Tuesday.

A Supreme Court hearing on the issue is set for Thursday at 9am (0900 GMT).

The legal complaint was lodged by the opposition Liberty Party but has the backing of the ruling Unity Party and its presidential candidate, incumbent Vice-President Joseph Boakai.

The court has also ordered the electoral commission to "stay any and all actions in respect of the pending run-off elections scheduled for November 7, 2017", a decision that looks likely to delay the vote.

Boakai is due to face former international footballer George Weah in the runoff, which was called after no single candidate won a majority of votes on October 10 -- though Weah topped the poll.

Attempting to head off the crisis, President Ellen Johnson Sirleaf hosted Guinean President Alpha Conde and Togolese leader Faure Gnassingbe along with Weah and Boakai to "listen to the various concerns and bring their expertise to bear on the table with a view to resolving those issues," a statement from her office said.

Conde is currently serving as Chairman of the African Union, while Gnassingbe chairs the regional body ECOWAS (Economic Community of West African States).

Sirleaf has also found herself in a firestorm of criticism from a wing of her own political party, as Boakai's supporters accuse her of secretly backing Weah.

A statement released on Sunday by the Unity, Liberty, and All Liberian parties said the October 10 election was "characterised by massive systematic irregularities and fraud", before adding Sirleaf had "interfered" by meeting polling officials ahead of the vote.

The president "challenged those dissatisfied to go about it in a peaceful manner," her office's statement noted, as the country attempts to minimise electoral violence that marred the last presidential election in 2011.

The case comes despite repeated international calls for all sides to ensure Liberia's first democratic transition in more than seven decades goes smoothly and to accept the official election results.

Although the October vote was hailed as largely credible by domestic and international observers,they recorded some irregularities and long delays in voting.

The presence of President Gnassingbe as a mediator of a democratic crisis may raise eyebrows in West Africa despite his ECOWAS position, as at least 16 people have been killed and scores more injured in anti-government protests in Togo, where internet shutdowns have also hit activists trying to organise.

Gnassingbe has won three elections since taking power in 2005, and a coalition of 14 opposition parties wants him to step down and a limit of two, five-year terms introduced for presidents.